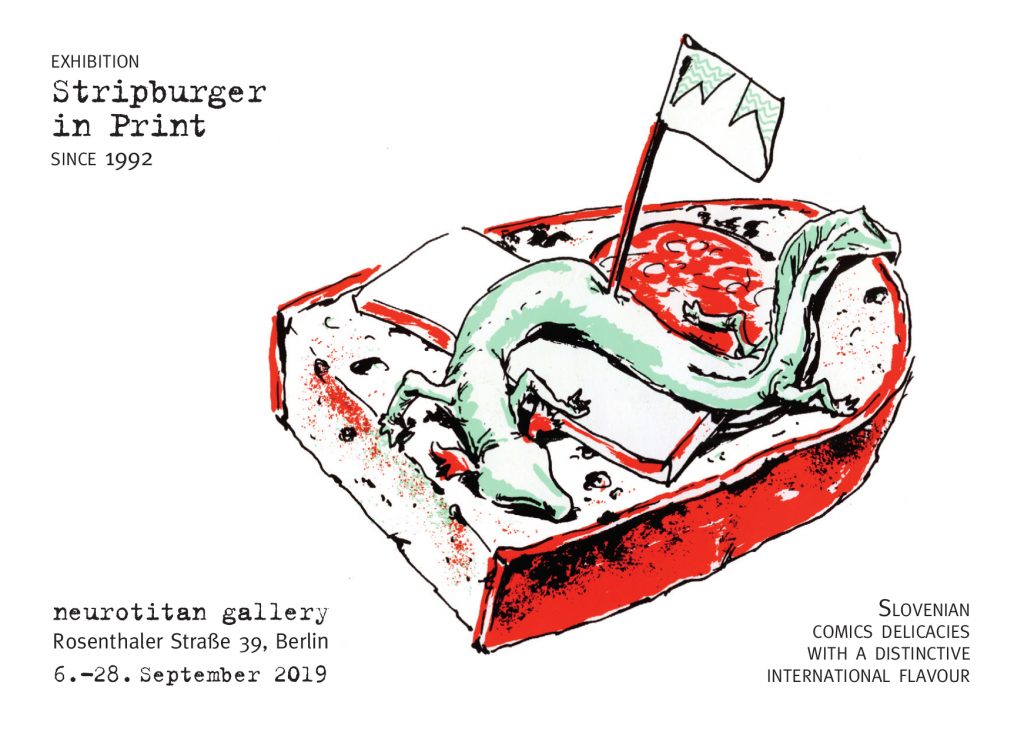 From the crossroads of Europe comes Slovenian comics magazine Stripburger with its mélange of artists, styles and narratives. After its first steps in the distant 1992, Stripburger became a pioneer of publishing independent comics in Slovenia. Since its very start, it aimed to break across national borders, to attract international interest and to include artists from all over the world. Today, Stripburger is known for its ceaseless exploration in search of new comics authors and local comics scenes. This, and of course excellent comics from all over the world, is what makes its flavour so unique and up to date!

The exhibition at the neurotitan gallery presents the very best of Stripburger’s 27 years long print production: not only original pages from selected comics, but also a vast amount of other graphic and printed goodies – silkscreen posters, covers, comic books and special editions such as Honey Talks, Greetings from Cartoonia, GolažGollage, Stripble and Workburger.

Signed by a bunch of Slovenian and foreign comics artists, the exhibited works present a wide range of original expressions, artistic styles and technical solutions. The exhibition aims to provide the international public with a glimpse of the diverse and exceptional contemporary comics and graphic production of artists gathered around the Stripburger magazine.

STRIPBURGER
Stripburger is an international comics magazine published in Ljubljana, Slovenia. With more than a quarter-century of continuous publication, it is today one of the internationally best-known phenomena in the Slovenian comics scene and an important member of the worldwide independent comics ’conspiracy’. Over the years, Stripburger tried to send out a message about topics that were somewhat ostracised or stereotyped. Madness, handicap, sexuality, ecology, war and human rights have all made it into Stripburger’s special issues. Latest among them is Workburger, a collection of comics revolving around the topic of contemporary work. Additionally, an important part of the magazine’s activities are comics exhibitions, workshops, lectures, and similar projects with the goal of promoting comic culture and creativity in Slovenia and abroad.

Max Andersson is an award-winning Swedish comics artist, animator, filmmaker, and an old friend of Stripburger. He is the author of underground comics classics such as Pixy, Death & Candy, Bosnian Flat Dog (with Lars Sjunnesson), The Excavation as well as several short films. Since 1997, he lives and works in Berlin.
A Swedish designer Helena Ahonen maintains her own studio and shop in Berlin. She has collaborated with Max Andersson on several art projects between 1995 and the present.