The recent release of Dunja’s new album Agonija! was a good excuse to finally interview her. Comic artist, drummer and bicyclist from Croatian island MaliLošinj is currently studying illustration in New York. In this e-mail interview, we talked about comics, the sea, the brain and things which, like it or not, come out of them. 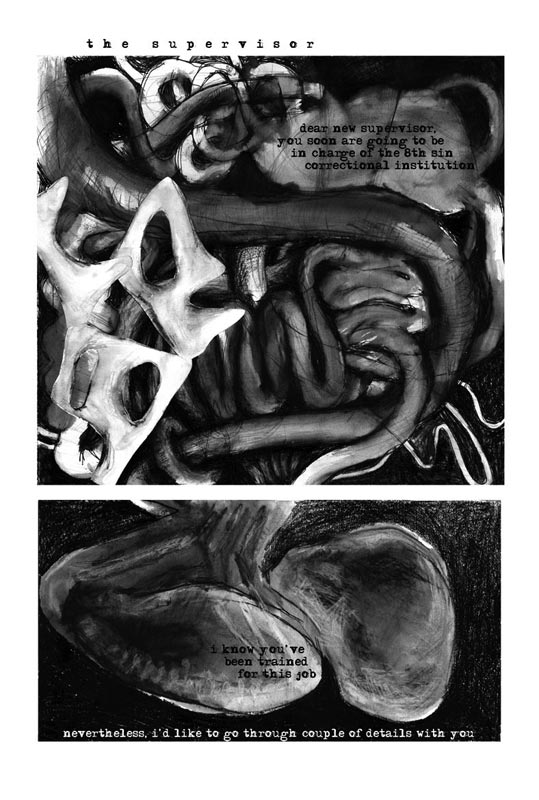 Publisher Fabrika knjiga (The Book Factory) recently released your new album,Agonija! Congratulations! In one of the stories, Betty Boop, Popeye, Mickey Mouse, Pink Panther, Pinocchio and Homer Simpson are sitting behind the same table. How do the heroes of your childhood (I assume) get along?
The Serbian publishing house Fabrika knjiga considers itself to be devoted to socially engaged publishing, proof of which being the Studiostrip edition where they have published Radovan Popovič’s comics, The Secret of the Spider’s Blood (Tajna paukove krvi) by Aleksandar Opacic and my own strip. Although at this moment the gesture is apparently non-profitable, I believe the editions will see a bright future, leave a mark in the history and gain universal glory.
Most of the characters you mention are from the strip The Night Sea (Nocno more) and they are not my childhood heroes. They are merely a graphic presentation of the differences in human characters in a given situation, the situation being a gathering of writers who have a tendency to constantly open their mouth in order to produce the phenomenon we call speech, sometimes even without the intention of communication. This seemed funny to me, so I decided to depict them. I chose the characters randomly.
The strip is somewhat personal, since it is based on the experience of a real boat-race, organized by the newspaper Morsko prase (Sea Hog). In this way, it is understandable to the co-racers and at the same time, open to interpretation.

You publish extensively in the local media, for example in the civilian initiativeVolim Lošinj (I Love Lošinj) and in the mentioned paper Morsko prase, dedicated to the sea and its inhabitants. It seems that the sea motif is very important to you, right?
The opportunity to publish for Morsko prase, a sailing and culture magazine,seemed bizarre at first, but it was undoubtedly a challenge that forced me to create one comic strip a month for almost two years and to produce my own creative system; I never had it before.
After I spent some years in Zagreb studying, the sea started to gain value for me. My grandfather used to take me out sailing when I was a child, so it grew on me in my most tender age. By sea I’m not only referring to the big blue salty mass, but everything it entangles. I’m referring to the nature around it, the relationships, the funny characters, and the sailing, the sun, the wine, the olives, the roasted octopus.
What is interesting is that I feel a greater need to evoke the sea in my works when I’m stuck in the city than when I’m home on the island.

There is a conviction that women are mostly readers of comic strips, if that; they rarely create them. This assumption is based on the fact that women authors are in utter minority when it comes to comics. How do you get along in the world of independent comic strip?
The comic scene I am part of includes many women. To cite just some of the names: Ivana Armanini, Irena Jukic-Pranjic, Anna Ehrlemark, Maja Veselinovic. In the workshops I meet many girls who are interested in comics. I am aware of the fact that men outnumber women authors, but this actually makes sense, if we take into consideration how the generations of pre 70’s era were raised. It was a world of strict division into male and female callings. Comics became a form of entertainment for boys and this was the path the industry took. I don’t think women would be very interested in drawing sweaty muscular men in tight costumes.
It was not until the underground strip phenomenon, which brought a freedom of expression, that women started to get more actively involved in the creative process. Entire generations are needed to achieve balance, but today the number of women authors is rising, especially in the USA, so I don’t think there is much to worry about.

In regards to this, how do you see the award for the best comic strip you received last year at the only comic strip festival in Croatia, Crtani roman sou(Comic Strip Show)?
It’s recognition of another strip scene and in this sense I believe that there is more to be done for achieving a certain coexistence, taking into account the limited size of the comic strip community. I am referring to a group engagement to the distribution and publishing, maybe even in the sense of finance acquisition, not necessarily in the sense of hanging out together.

In one of your interviews you said that you categorically reject the essentialist categorization of art made by women as “women’s poetics” or even “women’s humour”, but you still recognize reasons for differences that undoubtedly exist between comics, produced by women (or better said, feminists?) and comics, produced by men.
I reject such limitations, mainly because such categorizations cannot be found with works of our male colleagues – imagine classifications such as “male poetics” or the “brutishness of male literature”. The physical difference between the sexes is obvious, but there is also a difference in the way of thinking; as long as there is such a thing as “female literature”, the work of women in being ghettoized. The differences have to be recognized, but more in the sense of specificity. Works should be assessed according to other criteria than the sex.

How do you view your own work, which digresses from the realistic and linear storytelling? Your comics don’t have the typical dramatic structure, but are rather structured on absurd and surrealistic twists.
The classic dramatic structure is something I struggled with many years, because it was enforced as a rule. Now I’m beginning to see that this rule applies only to the Hollywood-type movies chasing after the Oscar. To me, this was always a hinder when it came to inspiration. I don’t like predictability and I always want to escape it. From the moment I gave up on the system, I stopped having problems with creativity. I treat comics as inserts from a larger story, I don’t know where it beings and I have no idea where it will end.

Your comics easily transcend from the tangible to the fantasy world. How hard is it to portrait these transitions between levels of reality?
The so-called tangible reality is one of the greatest frauds we unconditionally believe, even though it could be just one layer of a given infinity. Today there is a “media reality” that touches our personal reality to the extent we are not even aware of.
When I am creating a comic, what is most important is to surprise myself and in this way I achieve twists that are reminiscent of the dream world. I always manage to find symbolism in these absurdities, which proves that everything has its own meaning and that nothing is a coincidence. Brains are too mystified; they are just an organ weighing around 1400 grams.

Does your sense of humour help? We know it to be dark and sometimes mean, but at the same time breezy.
I see my work as a type of psychotherapy, but my humour stems from my attitude towards myself. When I’m not comfortable with myself, I get too cynical, and sometimes I’m the only one who’s laughing at my jokes; sometimes I cry and sometimes I get hysterical. I love the fusion of humour and horror; it results in a tingling feeling inside me that escalates into dilated pupils and finally ecstasy. In any case, I cannot imagine life without humour, no matter its shape or size.

Is your creative process based on associative mind flow or do you begin your work with a prepared script and storyboard?
Only one idea is enough, but has to be interesting enough to get me started. I develop my story and draw around it, than I remove it from sight, and finally, after two or four days, I bring it back to light for a few hours or the entire afternoon, but never at noon. I tackle it seriously with a balanced energy flow. After a week I change the concept and get completely lost. The result is a complete mess, but I don’t touch it again.

From the very beginning you worked with the Komikaze collective that supports new authors in printed and on-line publishing. Komikaze has published your first strip album. What do you think about its efforts and work that promotes the independent comic strip and the experimental and equal-opportunity approach to creating comics?
Well, not long ago, my colleague Opacic came to visit me at the island and we were discussing the boom that Komikaze made in the past years. Ivana Armanini, who at first glance seems totally relaxed and unbothered, stirred a true revolution on the alternative scene in a short period of time. The indiscriminative approach toward shapes, heterogeneity and affordable new media presentations are key points to creativity, or should I say explosion of this particular comic strip scene. We live at a time when comic strips feature just about anything, when the media and the form are yet to be fully explored, when a market is forming and is yearning for innovation. Chris Ware, who lives in the US, doesn’t have an interesting artistic approach, but is great at experimenting with the narrative part of the work. In his last work, Charles Burns places photographs next to each other to create an atmosphere, a story, an allusion without a text. Hopital Brut from France is extremely artistic and expressive; their editions are exhibitions on paper. At this moment we don’t realize that the comic strip is turning into a true avant garde in the world of art. Anything is possible. But there is an obstacle, and this is the capitalist system. This is why creativity is much stronger in these parts than inUnited States, and Komikaze have much to do with it in Croatia, as well asKozmoplovci in Serbia, Stripburger in Slovenia and hyper productive individuals such as Wostok and Igor Hofbauer.

You are currently studying in the US. Are you staying at the seaside? Will we see you here again and read more of your comics?
I am currently doing postgraduate studies in illustration at the School of Visual Artsin New York. First I wanted to study in France, but since I can’t speak the language, the US won. But I was disappointed. Profit plays the main role in all artistic segments, which means that creativity is narrowed to a minimum. At one of many Komikaze workshops I see more creative and relaxed individuals than I saw in all nine months of my stay in NY.
On the other hand, the amount and the accessibility of information are incredible, books and comics are cheap and available from all parts of the world. Technical superiority and material accessibility is greater than I expected and this encouraged me to experiment more.
New York lies next to the cold and filthy Atlantic Ocean. But the beach does offer a spectacular view of the skyscrapers and the planes in the blue sky, letting out their jumbo commercials, asking difficult philosophical questions (What is good life?) and offering very clear answers (Taco Bell Burrito!). If nothing else, I will create a strip on incredible emotions that overwhelm me when I buy a hamburger.