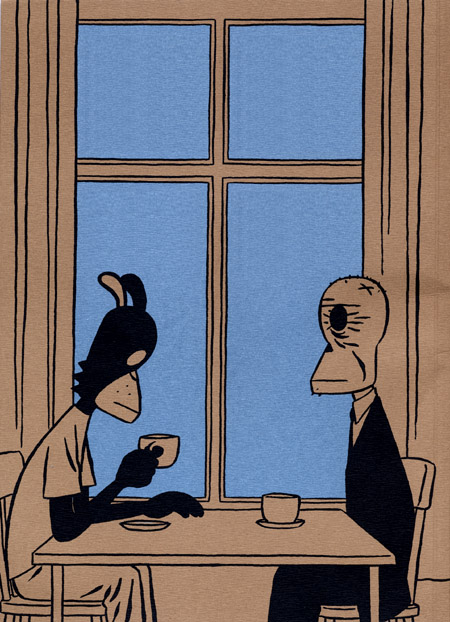 In the late nineties, when Jason’s comics began appearing in Stripburger, their style was completely different than today. It is still grimly witty and movie-style paced, but nonetheless unrecognisable. His transformation from the artist doing expressive human faces into the artist doing stylised animals that live according to movie scripts is still hard to swallow. These latter were perfected and refined through the years, in the process losing any expressivity they had left, and then introduced to the world of colour. Jason, in the meantime, has become one of the most influential contemporary artists with piles of texts written about him and his work.

Darko Macan once labeled your comics as “the saddest comics in the world” (quote from memory), which was meant as a special compliment to you. Your popularity indicates that the melancholic quality of your work appeals to many readers and that they easily relate to it. Does that surprise you? What is your explanation for this?

Except Hey, wait… I don’t find my comics to be that sad. I make comics about zombies, werewolves, martians and so on. There might be some melancholia mixed in with the humour, but it’s not planned. It just happens. It’s who I am, I guess. That’s what those long, dark winters in Norway do to you!

You’re without any doubt one of the most recognised contemporary Norwegian comics artists and the most obvious point of reference when it comes to the Norwegian scene. Are you aware of this status, how are you coping with it? What are your views on the Norwegian scene in general? Do you still feel a part of it, even though you don’t live there anymore?

It’s not something I think about. I don’t know how typical my comics are when it comes to Norwegian comics. I’ve kind of lost touch with what is happening over there among the younger cartoonists. Usually I’m in Oslo once a year for the festival there in June. There are several good Norwegian cartoonists around my age, like Lars Fiske and Steffen Kverneland, and I’m glad their work now will be translated into English (Olaf G.: A Life in Pictures will be released by Fantagraphics in June 2013, Ed.).

You’ve been moving around a lot lately and, if we’re not mistaken, the reasons for your decade of constant translocation were mostly professional. Last year, after many years of making comics, you were finally able to buy yourself an apartment. Were your expectations of the more developed countries, when it comes to comics, fulfilled?

One reason I ended up in France is their long tradition of making comics. It’s an industry, with lots of cartoonists making a living. At the same time, there is a lot of crap, genre material that is not very interesting. I check out the local comic book shops once or twice a month but it’s not that often I buy something.

I bought an apartment last year but I’ve lived in France for seven years now. I got tired of moving around and wanted to settle somewhere. And it’s cheaper to buy an apartment here than in Oslo.

Your comics are recognisable by a number of very typically anthropomorphic animals that look like each other not only visually but also in their body language. Their stony, stoic and expressionless faces allow for a bigger identification of the reader with the characters. But this approach, characteristic of many comics, has its downsides, too. The generic nature of the characters’ faces can quickly lead to confusion. How much does this limit you or stand in your way when conceiving the stories?

Yes, that might be a problem, the characters looking too similar. I often don’t see it myself. I look at them all day long. But for a reader it might be more difficult if one character just has a nose in a different shape than another character and that’s all that separates them. But I try to have that in mind now when I create the stories.

Your characters’ faces are mostly mute and this silence tells stories. What are the strengths of silence and what are the advantages of dialogues, in your opinion?

Well, silence leaves more to the reader, I think. Instead of the character saying or thinking why he does something, the reader will have to make up his own mind. I like those scenes with a character looking in a mirror or out a window but we don’t know what he is thinking. But I’m more comfortable with writing dialogue now than I was before. It’s one of the more fun parts of doing comics, much more than doing the actual drawing.

Comics making in my opinion differs from storytelling/writing in the fact (among others) that the possibility of a presentation of a stream of consciousness is nonexistent (except in some abstract or experimental comics). Would you agree that some spontaneity is eliminated due to the lengthy comics-making process? Are you okay with this? We’re asking because we’ve read somewhere that you like to play chess and this is a game that demands that its players think very hard before making a single move.

Yes, I guess some spontaneity is lost. Bukowski wrote  Post Office in three weeks – it would have been fun to do a whole graphic novel in a short time like that. And it is possible, there are some examples of that. But I like nice drawings, drawings that are appealing and which draw you in. Like Hergé’s ligne claire. And that takes time. It’s part of doing comics and something you have to accept, that it takes 6 months to draw the comic, and the reader will read it in 20 minutes. 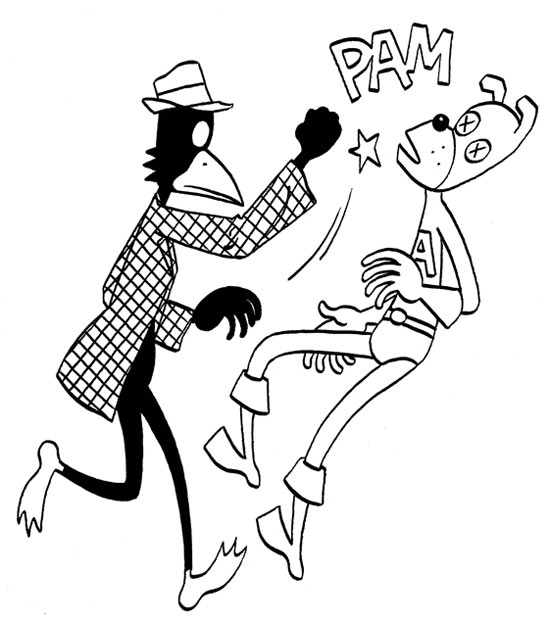 We’ve learnt that a movie is apparently being made based on your comic book I killed Adolf Hitler. What are your feelings about a movie adaptation of your comic? Are you (and, if so, in what way) collaborating on the production of this movie? It is well known you’re a huge cinephile. Did you ever have any ambitions in the movie field? What is it about movies that you don’t find in comics?

I’m not involved in the movie adaptation. I wasn’t asked to participate and if they had asked me I would have said no. For me the story is told. I already did the comic. I have no expectations for the movie – if it actually happens. I don’t like most modern films. I already expect it will have the fast editing and constantly moving camera you find in films today. Hopefully they won’t screw up the story as well. If it makes anybody discover the original comic, I guess that will be a good thing.

I have no interest in doing movies, be it writing a script or directing. I’m not a director type who can boss people around. One of the things I like about comics is the fact that you do it all yourself. I think it’s easier to get a personal vision across that way. I like to watch films. I don’t think there’s anything in films that you can’t do in comics. Well, except movement. And singing. A dance sequence, like the one in Hal Hartley’s Simple Men, would not work as well in comics. You wouldn’t get into it and start tapping your toes like that in a comic.

Since we’re discussing this comic book – there seems to be no visible consequence of the time shift and the eventual assassination of Hitler in the hit-man’s present time. Do you like to speculate on possible time paradoxes which could happen if/when time travel would be possible? Or is this question irrelevant to your comic (which is, in fact, a love story)?

No, it doesn’t really interest me that much. It’s based on your view of humanity – mine would be kind of pessimistic, I guess. If you killed Hitler in the past and World War 2 never happened, I don’t think it would change much in the present, we wouldn’t be better people, we would still find a way to screw things up.

Popular obsession with Brigitte Bardot doesn’t bother only you (there is a hint at this in Werewolves of Montpellier), but some of my favourite Sempe’s caricatures ridicule exactly this fascination with the actress. Does it happen to you often to not quite share a (con)temporary obsession with a certain (pop culture) phenomenon? Especially knowing that the majority of elements of your comics (characters, montage, composition, narrative approach…) rely on these familiar pop cultural phenomena? Or is it about reaching out to a wider audience this way?

I don’t know. I did do a zombie book but it’s not a genre that interests me. I haven’t seen Walking Dead or read the books. There are lots of modern TV series and films that I don’t watch. I’ve seen some of the superhero films but I’ve pretty much lost interest and will probably just skip them in the future. I mostly watch older stuff, Westerns or science fiction films from the 50s, film noir from the 40s and so on. The books are my take on those genres. It’s not about reaching a wider audience. If that were the case, I would do vampires in love or whatever.

You’re writing a blog called Cats without dogs. What is blogging to you? A connection with the readers, a medium for channeling your other inspirations or a kind of a modern diary?

It’s not a diary. I don’t write about myself that much. The blog is mostly to show sketches or talk about the process of making comics. And I might write about films I watch since that forces me to actually think about them, what makes them work, or not, and so on.

Your comic book Isle of 100,000 Graves is your first longer comic that has been created in collaboration with a writer. Since your forthcoming album Athos in America and Lost cat, the “soon to be published” comic with Fantagraphics, have been created exclusively by yourself, does this mean you haven’t run out of ideas yet as you once confessed you feared might happen? Are you still willing to make comics in a tandem/duo?

Yes, I’m sure that will happen again at some point. But for the moment, as long as I have ideas of my own, I will probably prefer to do that. I find it more interesting – and more fun – to do the whole thing. To just do the drawings is more work – and a bit boring, actually.

You’ve been frequently working with the colourist Hubert Boulard lately. How does it feel when someone else is working on your comics as well? Do you envisage the atmosphere in advance while drawing them or do you rather leave these choices to the colourist?

I leave that to the colourist. I’m very happy with his work. It’s only if there are actual mistakes that I ask for changes.

Last but not least: a personal question. Do you keep any pets? One would think you have a cat…

Yes, I have a cat, but I only got it a couple of months ago. I couldn’t have a cat when I moved around.

John Arne Sæterøy, better known as Jason, was born in 1965 in the coastal town of Molde, Norway. His first comics were published in 1981 in the Norwegian magazine KonK. In 1997 he began publishing the independent comics series Mjau Mjau, in which he developed the distinctive style for which he is known. He eventually became completely focused on creating the comic books for which he has also won a significant number of awards worldwide. Since 2007 he has been living in Montpellier, France. He enjoys watching old movies and writing his blog entitled Cats without dogs.