Those of you who were reading Stripburger regularly for the last couple of years, should have a quite good idea who Malin Biller is. This young (born in 1979) Swedish comic creator hasn’t only become a regular on our pages, she also produces some of the most sincere, almost exhibitionist comics in the world of autobiographic comics. Are there any further layers of her life, the ones that weren’t already uncovered in her comics? Stripburger would sure like to know. The following interview was done by Gašper Rus and Jakob Klemenčič.

G.R.: The readers of Stripburger know your undergroundish comics, mostly autobiographic in nature. But the rest of your artistic output is quite a mystery to us. What can you tell us about this? Is there a significant difference between your “personal” works and more “mainstream” ones (if there are such)?

M.B.: Hmm… I suppose there is a difference but I haven´t thought about it before. I have always made different kinds of comics, depending on my mood. Most of them are autobiographic in one way or another, even those who are a bit on the mainstream-side. As a protest against the tiresome criticism that female artists in Sweden got a few years ago ( we were accused of only making boring, tragic comics about broken hearts etc),I invented a new genre which I called “Autobiographic Fantasy”, as a nice way to spice up my stories a little. I think it says a lot about my work. I like testing new things, different techniques and so on. But all my work is personal. I could never “sell my soul” if you know what I mean. I simply find it hard to choose one way of expressing myself. Sometimes I feel down, other times I feel like sharing a funny, colourful episode from my life. In Sweden there is however a big gap between “arty”, serious comics and funny, mainstream ones. We´re not really allowed to like both, so it´s not always accepted to work as I do. Sometimes it´s tough, but I try not to listen to snobbish comments. And I quite like annoying people…

J.K.: In the comics world, there are few female cartoonists that could match you in your sheer brutal honesty. Can you name some kindred soul among fellow female (or male, for that matter) cartoonists?

M.B.: Really?  I don´t know if I agree. But since I don´t read much comics myself, I must admit I´m not as well up in it as I would wish to be. However, I know there are quite a few female cartoonists in Sweden who reveal a lot about themselves in their work, like Liw Strömqvist, Åsa Grennvall, Stina Hjelm etc. There are a lot of talented female artists here! I have many kindred souls, since many of the Swedish cartoonists are my friends, male as well as female, it´s impossible to name only one…

G.R.: You told me that you are currently working on a new album and that you find this experience somewhat tiresome. Indeed it seems that the short story form is ideal for you. Would you agree with this?

M.B.:  I don´t know yet. No, actually I think both forms suit me, but short stories are easier, no question about it. This time I´m writing/drawing a story divided into chapters, but still 180 pages! It´s tiresome but very exciting. But it´s not the length that is the main challenge for me, it´s the fact that I´m dealing with new, very serious issues. I´ve had to dig deep within myself and fight a few “demons”. At the same time the story just “flowed out of me”, if you know what I mean. I´m a perfectionist (believe it or not) and I want this story to be the best possible. I constantly step out of myself and look at it, thinking, “Is this interesting for other people?” It has to be!

G.R.: We saw some short strips on your page … What’s the market for newspaper comics in Sweden like these days?

M.B.: Oh, I love making strips! It´s quite new to me, but since I got some awards for them, I gained more confidence and now I simply can´t stop drawing them.The market in Sweden could be better. It´s almost impossible to be published in newspapers if you´re not syndicated. Even then it´s hard (I´ve recently been syndicated by Europa press, so I´m hoping for the best!). Magazines/ newspapers tend to pick foreign, mostly American strips. They cost less. But the market is improving towards welcoming less mainstream, more edgy stuff like “Nemi” and “Elvis”. All Swedish cartoonist agree on one thing though; we are under-payed!

J.K.: Your comics give an impression of great spontaneity and dynamic execution. Is this just our impression? How much time do you spend on a single page on average?

M.B.: My mum often says I´m too spontaneous. Maybe she wants to stop me from revealing  too much about myself in my comics… but that´s just me. I´ve got little patience. When a story pops up in my head I simply have to get it on paper. But there is a lot of preparing work before I´m satisfied with a comic (if I´m ever satisfied). I try never to censor my ideas in the critical first phase of the creating process, though. Depending on which technique I use, a page can take between 3 and 8 hours to make, writing, sketching etc included. The techniques I work in varies along with my moods. I´ve always been fascinated by how to express movement in a comic, how to make it “flow”. I use many of the tricks seen in films. Comics are a lot like films after all.

G.R. : My big favorite among your comics is “A Child is Made” while Jakob favors “The Surprise”. Is there one that is especially dear to you?

M.B.: Yes, “the Surprise” is one of my personal favourites, since it´s about a very difficult time in my life. At the same time it´s something that most people can relate to in their own way; death of a loved one and grief.

J.K.: Text and drawings seem to play an almost equally important role in your comics. Would you agree with this? Which one do you rely more heavily on? Have you ever tried to or at least speculated of telling a story with words only?

M.B.: I agree! Once again, I can´t choose! At the art school I went to I was restricted to use images only. I felt I needed more. So I started using words in my paintings. My teachers wrote it off as comics, not art! Can you believe it? Comics are an art form. I´ve always loved writing as well and I often have to “kill my darlings” when I transform a text into a comic. Text is important, yes, but in my opinion images should say more.   I would love to write a novel in the future, but comics are my medium. It´s in my blood… There´s still so much to explore there. 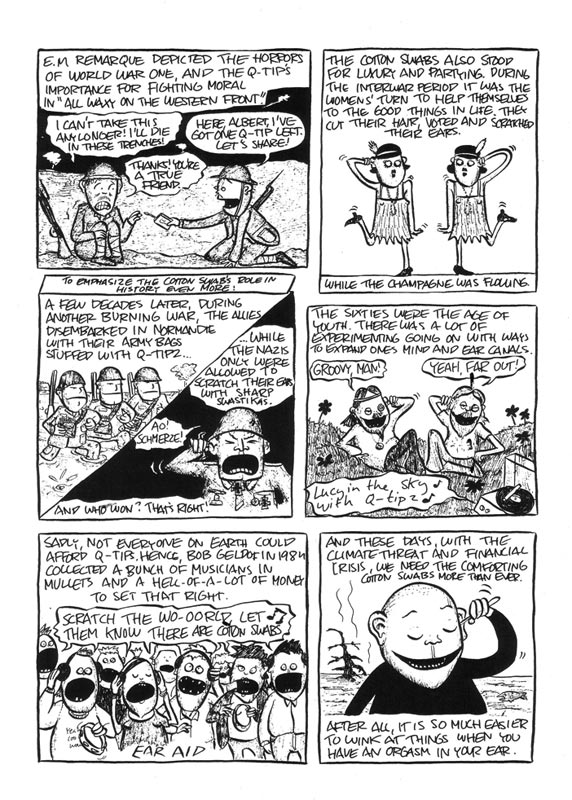 J.K.: One of the recurring themes in your comics are your experiences with psychiatrists and psychiatric treatment in general. Some of us suspect that there is something self-therapeutic about your comics as well. Are we right about this? (If so, how effective is this method compared to other ones?)

M.B.: I think all artistic work is self-therapeutic, more or less. Mine is, no doubt! However I always aim to tell a story so that others can relate to it. I guess that´s what drives me to make a comic. In Sweden there is a tradition of keeping ones problems to oneself. We are a shy, quiet people. And depression and other kinds of mental illness are very common! I think people need to talk about it and not feel ashamed. I´ve spent most of my life being embarrassed of who I am. That´s painful. Making a comic is far more effective than seeing a shrink when it comes to mending a broken heart, dealing with a dreadful childhood or simply getting revenge!!! And laughing at the tragedy to some extent is healthy.

J.K.: Honest self revelation seems to be typical for artists belonging to, broadly speaking, protestant culture (Dürer, Rembrandt, northern-american alternative auto-bio cartoonists). Where do you set the border of self-censorship (if there is one)?

M.B.: Hmmm…  If there is one…yeah… I try to avoid hurting those around me. Otherwise I tell it all! Some say self-revealing comics are out of fashion, but I don´t think they´ll ever be. People want to read about other people´s lives. They´re true stories and along with keeping ones misery to oneself, Nordic people love comparing their own to others. It makes them feel better about themselves if someone else feels like shit. We are a very egoistic bunch, us northern protestants. Few of us believe in anything higher these days. Therefore, I suppose we need to search for answers within ourselves. Gee, this is starting to sound a bit deep…

G.R.: Reading your comics one gets the impression there’s nothing you’d be ashamed to reveal about yourself. Could it be that this physical exhibitionism is just a camouflage for something you don’t dare to speak about?

M.B.: You are probably right! I´m not afraid of revealing very personal things, but few people know all my secrets. Maybe it´s a camouflage. I´m not sure to be honest.  But I´ve already spoken about my vagina, my childhood, the loss of my father, anxiety, depression….and in my new album I´m really telling it all. Maybe you could call me a brave coward?

J.K.: How do you see the differences between Swedish and Finnish comics? My impression is that Finnish ones tend more towards art expression while Swedish tend towards more rootsy undergroundish tales about ordinary life. In this respect your comics seem almost emblematically Swedish. Can you comment on this?

M.B.: Yes, that´s true! I got to know a few Finish cartoonist when I went to Kemi, Finland. I love their work! It´s artistic, and often has a weird humoristic undertow. In that regard I prefer Finish comics to Swedish ones. I suppose I´m brought up in the Swedish culture, hence my Swedish way of telling a story, or choosing a topic if you like. Hopefully I will widen my horizons… The few comics I read growing up were mostly foreign though, so my style must be a mixture of inputs, from where I´m not sure.