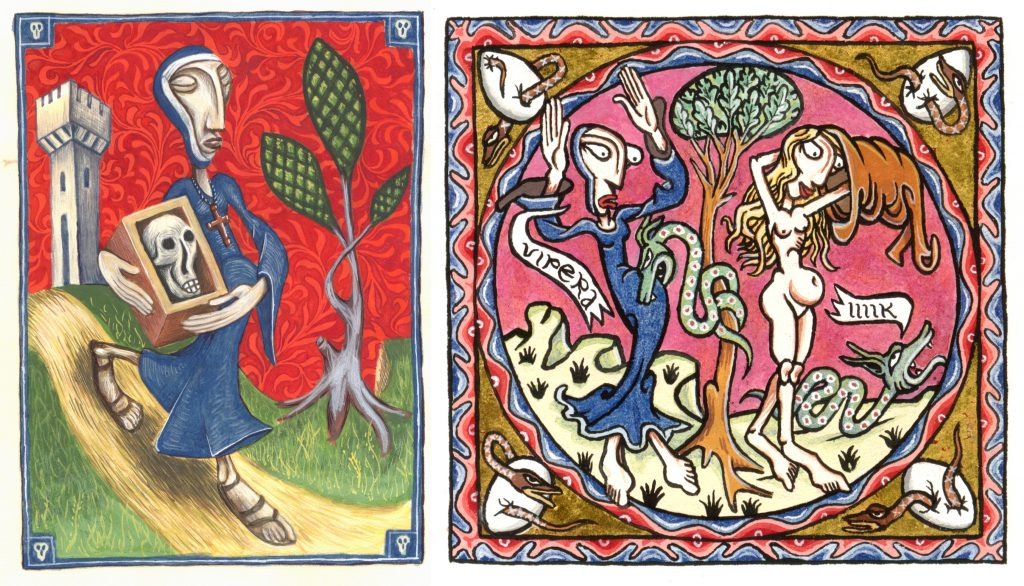 The book launch of another comics »heavyweight« this autumn – this time of the graphic novel Inferno, created by Marcel Ruijters – is followed by a rich accompanying program, centered on the same-titled exhibition in the Alkatraz gallery. The artist will exhibit a series of original pages from the book, illustrations and murals, along with a series of illuminated drawings on parchment paper, inspired by the tradition of medieval book illumination and its iconography, enriched with a pinch of irony. The drawings were coloured using ancient techniques and materials by the French colourist and printmaker Romuald Sourisse, who will also showcase the materials, used for the creation of pigments, in the gallery.

The graphic novel Inferno was inspired by the Divine Comedy by Dante Alighieri, an evergreen work of European literature. The comics paraphrase of this classic in Ruijter’s interpretation assumes the form of a grotesque and meaningful pasticcio that provides the reader with a clever fabula and a completely unexpected end-twist. This modern version of travel through nine circles of Hell is drawn in the Ruijters’ recognizable neogothic manner. The work as a whole is characterized by rich metaphorics, easily applied to the contemporary times. This free adaptation of the classic work by Dante Alighieri came to being as a satire of capitalism and was originally published in Dutch mere months before the stock market crash in 2008.

Inferno, originally published in 2008 in Amsterdam (by Oog & Blik), won Marcel Ruijters the renowned Dutch VPRO award, in the category of graphic novels. It was translated into Slovenian by Mateja Seliškar Kenda.

Marcel Ruijters (1966) is the creator of more than 30 comics books, translated into numerous languages. His distinct style is distinguished by flirting with the medieval visual tradition. He works also as an illustrator, translator, writer and editor at the Dutch magazine Zone 5300. His comics were exhibited in many exhibitions and festivals around the world, winning him numerous prizes and awards, among others the respectable ‘Best young artist’ award in Haarlems Stripdagen in 1992 and the Stripschapprijs in 2014.

Romuald Sourisse is a French printing master and bookbinder, an extraordinary specialist in traditional graphic techniques. He’s engaged in conservation and restoration of old books, prints and documents. He lives and works in Forcalquier in the southern France, where he manages Le Garage L, the artistic and production studio.

Thursday, 6th October, at 11.00 @ Pritličje
Comics brunch with artists and publishers participating at the Stripolisfest festival.

Saturday, 8th October, at 15.00 @ Kino Šiška
Free bookbinding workshop »Create your own sketchbook« with Vanessa Krolikowski (12+)
How to create your own sketchbook, diary or unique book in a simple way? This three-hours workshop will introduce the attendees to the techniques of creating original hand-made books and booklets. A special emphasis is on the creation of book covers from different textiles, as well as on home-made paper and DIY binding. The free workshop is led by Vanessa Krolikowski, a specialist in traditional bookbinding and restoration of old prints from the French graphics studio Le Garage L.
Mandatory pre-registration: tanja.skale@kinosiska.si.

Saturday, 8th October, at 19.30 @ Kino Šiška
Presentation of the Inferno book in presence of the author at the Stripolisfest festival

Sunday, 9th October, 10.00-18.00 @ Slovenian Ethnographic Museum
Free linocut workshop with Romuald Sourisse (12+)
One-day free linocut workshop, led by all-around French artist Romuald Sourisse with help by David Krančan, is intended for all those (age 12+) who want to master the basic skills of this old graphic technique or upgrade existing ones under the mentorship of an experienced master. The purpose of the workshop is to learn the basics of linocutting and to independently print one’s own work.
Mandatory pre-registration: 01 3008 750, 031 728 955 or blagajna@etno-muzej.si.

Wednesday, 12th October, at 18.00 @ Galerija Alkatraz
Group tour of the exhibition, discussion with Marcel Ruijters and a presentation of pigment production after original medieval recipes with Romuald Sourisse.

The publication of the graphic novel Inferno, the exhibition and the accompanying program were made possible thanks to the Royal Embassy of Netherlands in Slovenia and the Nederlands letterenfonds. The visit and the workshops of Romuald Sourisse was made possible by the French Institute in Slovenia.

The program of Forum Ljubljana is co-financed by: Municipality of Ljubljana-Department of Culture, Ministry of Culture and Slovenian Book Agency. 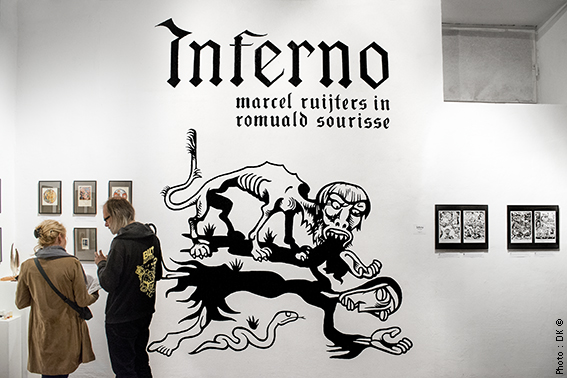 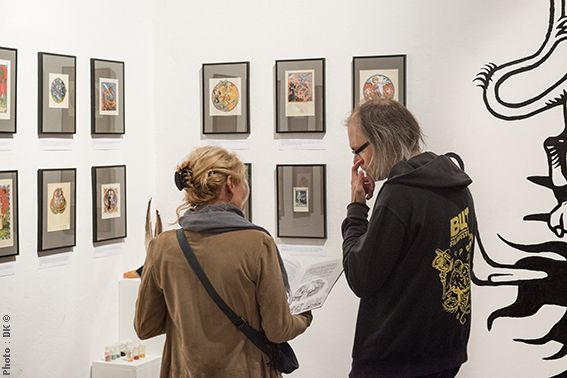 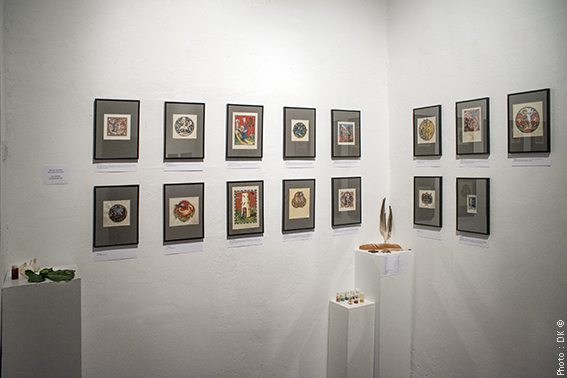 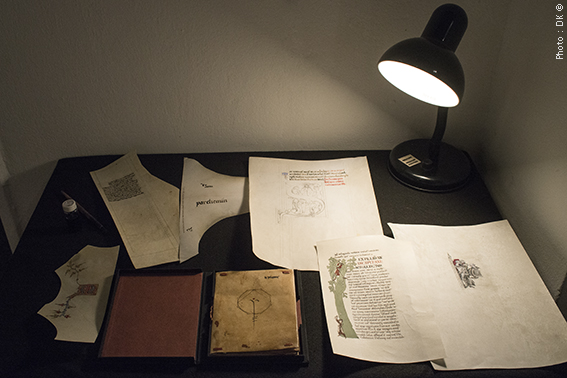 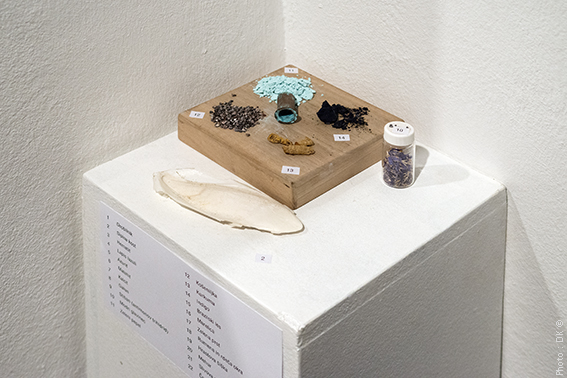 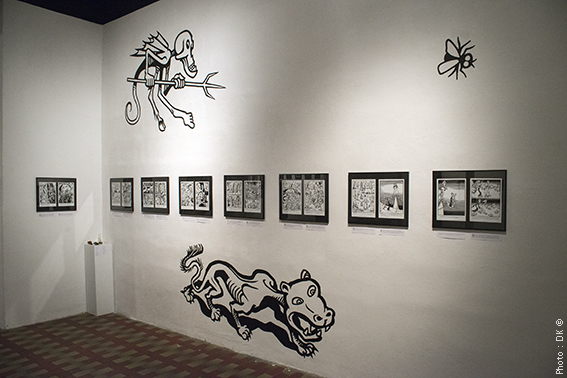 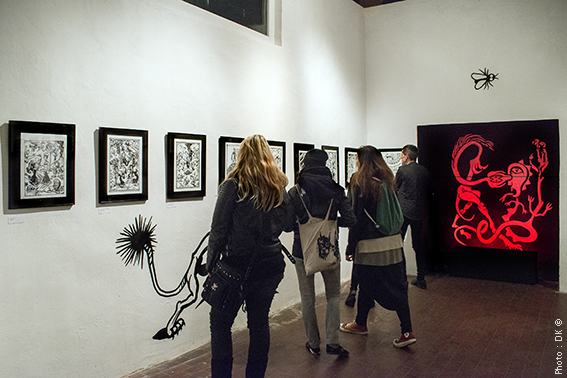 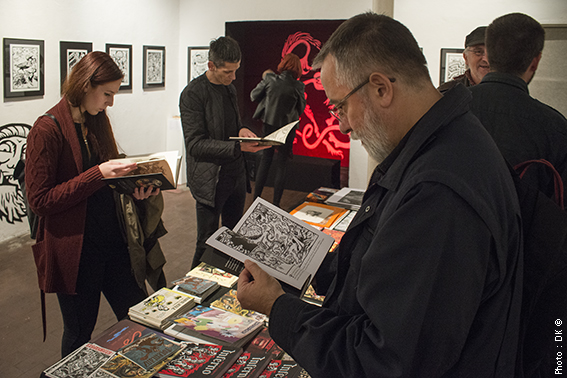 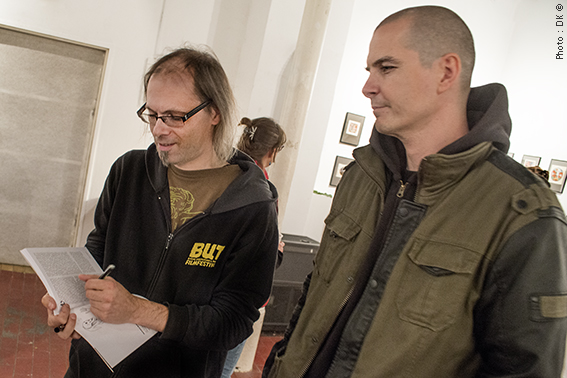 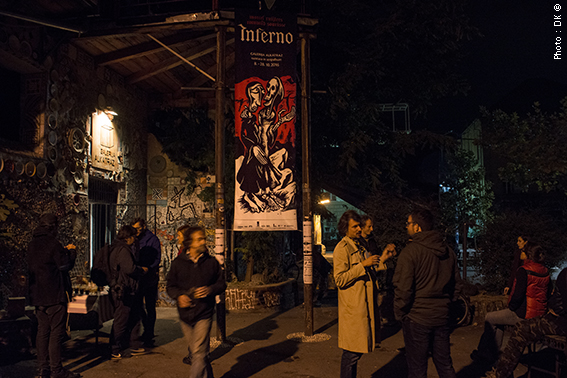