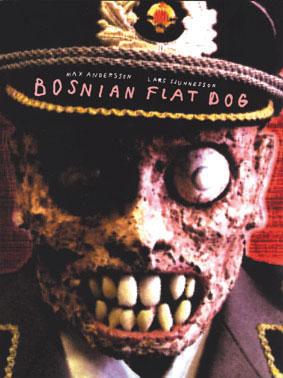 I suppose SB readers need no introduction about you. One thing that probably fascinates them about your stories is that they seem kinda out of this world. There’s almost like a certain Andersson universe that you depict in your comics… Where does it come from, where do you pick the pieces to construct it. It almost seems to me that you worked once in a laboratory or had weird collections as a kid.

The strongest cultural experiences I can remember from my childhood was the Disney version of The Jungle Book and Frankenstein with Boris Karloff. If you mix those two you probably come pretty close to the foundation of my artistic universe. It’s also possible to trace influences from the geography of the place where I grew up, which is an island in the Baltic sea, not the famous one where Ingmar Bergman lives but the one next to it. It’s totally flat and only bushes and weeds grow on it, almost like a desert. From our house it was about one kilometer to the nearest neighbor’s house, and about three kilometers to the nearest village. I still have problems drawing trees. I don’t know what they really look like.

A lonesome childhood…hm, that’s how a lot of people start drawing comics. One of the influences was also the Balkans in BFD. In your view quite a different place from the calm nature of a lonely island. It seems quite strange for me that so many people got hooked up on Balkans and they just keep on producing strange works about the place I find so ordinary. What is the thrill, the exoticism of this place? And why the Balkans acctually?

When we were travelling with our Bosnian Flat Dog show and the Tito mummy we once stayed with Igor Hofbauer (look at page 2 and on), a comics artist and poster designer in Zagreb. He started telling us stories about Sweden, where he had just spent a month with his girlfriend, and how completely fascinated he was with the great industrial ruins of the iron mines which stand completely deserted since the 60’s and 70’s out in the woods there. I had never thought about that, because Sweden seems so boring to me that don’t expect to find anything interesting there. Meanwhile, we were driving around the Balkans looking for decaying buildings from the Socialist 60’s and 70’s and ruins from the civil war! I don’t think it’s nostalgia or exotism, I think we’re all just desperate for something authentic instead of the mass produced monoculture that’s taking over everywhere at present. 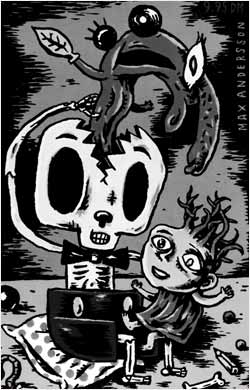 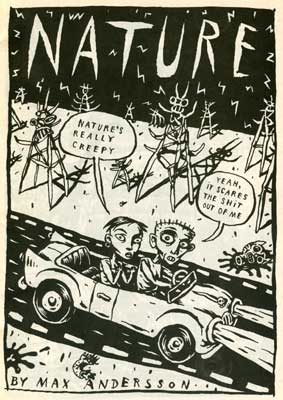 Good answer. I personally think that for some reason the Balkans caught the eye of western comic artists as it represents for them this strange place where dreams and reality coincides, where there is still authenticity to be found. I think there’s a little bit of Zograf in this. And in BDF as well. Did anybody complain about the BDF. Saying that it was wrong to do it, not corect of you or something like that? The characters of Radovan Karadzicd widows of Srebrenica would in any other context probably cause some complaints.It seems to me that the story is told without any guilt, remorse. A sort of a post-apocaliptic, amoral world that we so often meet in your other comics. A post war society almost looks like a playground in BFD.

It’s true, the book is just as much, or even more, about our own personal universes than it is about the Balkans. We just used it as a screen to project our subconcious worlds on. The reviews of BFD in Sweden were pretty confusing. Quite a few seemed to feel that we were violating the borders of “good taste” and that we were exaggerating and making fun of things that can’t be made fun of. Some were actually complaining that we didn’t clearly take sides and didn’t put all the blame on Serbia etc. Interestingly, the journalists who were offended and claimed that we weren’t concerned about “the truth” were the ones who didn’t have any personal experiences of their own from the region. The ones who had, on the other hand, all wrote positively about the book. I think some of this has to do with the general misconception that comic books are still supposed be mainly a superficial and humorous medium. It wouldn’t occur to a lot of people that maybe we weren’t trying to be funny. And in order to enter the world of the unconcious with any kind of openness and honesty, one has to leave all cocepts of morality at the door because although they look nice they’re pretty much useless in there. 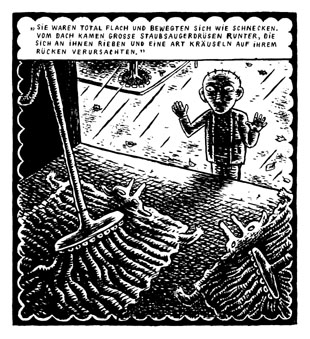 You did this comic with Lars Sjunnesson. And to tell you the truth, eventhough I can clearly separate his work from yours, in this comic you two almost merged together. How did you do it? Where are the limits between the work of on and the other?

I think one of the reasons, at least for me, to do this was to investigate a little bit what constitutes an identity – e. g. an individual, national or artistic identity. What happens if we start to dissolve parts of what we think makes up our identity and mix it with something else, what will the results be, and is it even possible? It seemed natural for this particular project. We got almost fanatic about it towards the end, really tried to disintegrate our individual styles down to the smallest line. So in the drawing of one character, for instance, there might be a hundre little ink lines done by me and a hundred done by Lars, not in the same spot but all in different and completely arbitrary places. It was possible, but it almost drove us insane.

And also it actually seems that the whole of Andersson-universe has lost it’s obligations with morality, guilt (Pixy included). I think there is a lot of scandinavian comic artists (Lars included) that only want to tell the story – and not tell anything with the story. Can you comment on this?

I usually tell the story because I can’t explain it. If I could explain it, why bother telling it? It would be a lot easier, but less fun.

I see that you have also been translated into Polish, Czech, soon you will be published in Slovenian (among other more spoken languages). You were published in Japan, Russian artists always talk to me about you all the time.You are also one of the few european artists that suceeded in America. Seems like you are going places where other european comic artists failed to leave a mark. Any clue, why so? And why you are so appealling to the East-european public?

I have no idea. I guess they recognize something of themselves in it, and of the world they are living in.

Can you tell us more about the Japan experience?

The Japanese are far ahead of us here in Europe and America regarding comics. To them it’s natural that comics can be a medium for everyone and about any possible subject. And they have understood that comics have nothing to do with naturalism. They always anthropomorphize everything in advertising as well as everyday life, so they have no problem with for instance a child with a car head. It’s perfectly normal there. Furthermore they don’t seem to differentiate between what we call “mainstream” and “independent” culture. I did an interview with a woman from the Japanese edition of MARIE CLAIRE, she had read Pixy and was able to discuss its contents in depth, and she also knew more about comics than many journalists specializing in popular culture that I’ve met. This would be almost unthinkable in Europe.

There is a news film prepared. About the BDF as I know? Anything you can tell our readers about it? How does your work as a filmaker connect with comics?

There is a lot of video material, mostly shot during our Bosnian Flat Dog Tour, with ourselves and the mummy of Tito travelling around Ex-Yugoslavia. My favorites scenes are the border controls. And Tito’s karaoke performance with a transvestite in Zagreb. I’ve been planning to do something with it for years now. It looks like it might actually materialize as some form of documentary later this year. I’d like to add some animation though, to fill in the parts that are missing to make it a coherent story. Film and comics are really different, a lot more so than people usually assume. Comics are quite a bit more complex. That’s why it’s so difficult to make a good movie from a comic. On film it takes forever to tell something that can be expressed in one or two single panels in a comic. And since actors are real people, they are rarely as believable as comics characters can be.

And any advice on how to read Pixy – soon to be published in slovenian?

No. Reading is a really intimate thing, a very personal relation between the reader and the book.
I have no right to interfere there.