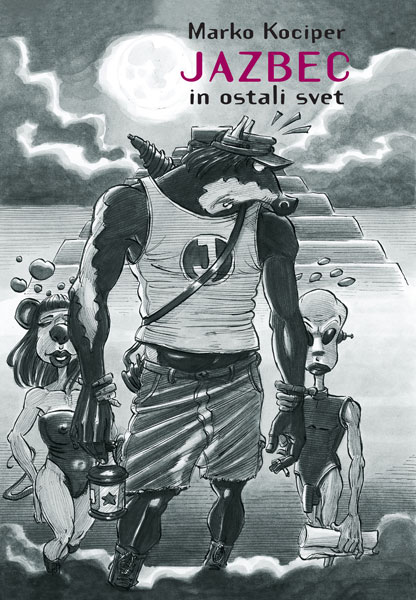 Badger and the Rest of the World – the first Slovenian vulgarly incorrect saga about Badger’s incredible adventures!

The comics in the Badger book are loosely connected stories about Badger, a very peculiar character, and his adventures in the real world. They’ve been freely re-created after folk tales of the Native Americans, but they’ve also been permeated with a distinct local feel and taste. Badger is far from a role model: he’s a lazybones who likes to hang in bars and hit on women, but his weaknesses are quite common among ordinary people, making him a relatable and likeable character. One common feature of these stories is an obvious eroticism that never collapses into cheap pornography thanks to the artist’s heavy use of grotesqueness and absurdity of the situations his protagonist finds himself in.

Marko Kociper is one of the most visible comics creators in Slovenia, instantly recognizable by his characteristic style of drawing and the provocative content of his stories. He usually writes the stories himself, but he’s also created comics after literary works. This self-taught jester is a great conoisseur of the soul&mind of the common man and as such an excellent documentarist of the spirit (and spirits) of our times.