LARS SJUNNESSON – “What is the point of being normal in a world like this?” 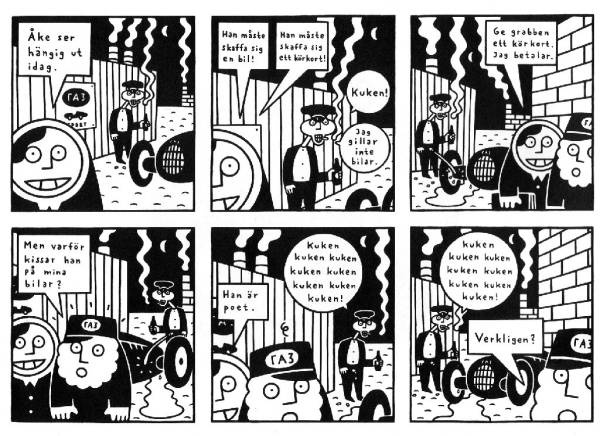 He’s a recurring artist on the pages of this magazine and always warmly welcomed. Wacky wits, relaxedness, critical thinking and a non-conformist creative approach are the defining characteristics of Lars Sjunnesson. These traits (that are rare to come by nowadays, by the way) contribute to the uniqueness, bizarreness and memorableness of his comics universe which reflects the perversity of the modern world. The premiere of the film Tito on Ice, depicting his adventures with Max Andersson in the lands of former Yugoslavia, is taking place at the Stockholm film festival while I’m writing this introduction. This is why it seems the time is appropriate for Lars’ comeback to one of those lands to remind us that the world in not changing for the better.

Questions were provided by Mimo.

Slovenian readers came to know you thanks to the Bosnian Flat Dog, the serial that was first published in Stripburger, then in 2011 republished in the album format by Društvo za oživljanje zgodbe 2 koluta. Here and there we also published some other comics of yours, while now we’re featuring the adventures of Åke Jävel in story (2nd part) and the main character on the cover of the magazine. You’ve met Štefan Skledar, the guy who wrote the preface to the Bosnian Flat Dog, in your student years. It is obvious that you’re connected to Slovenia by some sort of strange coincidence, as you’re regularly published in the language of mere 2 million people on a rather undeveloped comics scene. What’s your side of the story about this curious symbiosis?

It has to do with biochemistry, I think. I can’t explain how it works but it’s something that I really believe in. It’s like a totem. Every person is given a country. I got Slovenia. And I’m very happy about that. Really happy. I mean, it could have been any other country. It could have been Saudi-Arabia or North Korea or even Sweden …

What were the comics that you’ve been reading at your young age like? Which comics influenced your work the most? Do you read comics today as well? Are you acquainted with the contemporary international comics?

I didn’t read a lot of comics as a kid actually, except for Tintin. And I didn’t discover alternative comics until I was in my late teens. I remember that Philippe Vuillemin made a big impression on me.

But I couldn’t say that I’m well acquainted with contemporary comics. No, not really. Even though once in a while I do read comics. Right now it’s Klas Katt dricker kaffe, the latest book by Gunnar Lundkvist. 490 pages of pure bliss.

Reportedly you don’t make sketches, but you go straight to the final drawing. Do you regard comics drawing as a pure pleasure time when you can completely relax? You also use highly graphic drawing techniques, eg. removal of acrylic paint with a razor. What does your creative process from the idea to the final result look like?

I try to avoid doing sketches. In fact, I had a long period totally without sketches. It was great. But then I started doing them again. I hate it. And they’re lousy and totally useless …

Anyway, I always start with writing a story. And this is the nice part of the work. The rest is just hard work. But luckily I was born in an environment where hard work is not only highly valuated but also supposed to be something that is difficult. If it’s too easy then there’s something wrong. I guess that’s why I feel the need to invent more complicated ways of working. Because I feel like I’m cheating if it’s too easy.

You have bizarre characters and absurd stories, as though you didn’t use your brain while creating them, as you once stated. How come is then possible that the end result is so elaborate and depicts the perversity of the modern world in such an eerily authentic way? Is this way of living really so much ingrained into our common conscious?

Maybe the characters would have been less bizarre and the stories less absurd if the modern world wasn’t so full of these drones, of random bombings, false-flag terrorism and imploding and exploding banks, as it is. I mean, what’s the point of being normal in a world like this? (Especially if you happen to be a comic-antihero).

Can you tell us a bit more about this Åke Jävel character? We didn’t know he was almost 30 years old!

30! Yes, it’s amazing. And he still behaves like a teenager. By comparison, Big Fat Bo is almost twenty and he is a lot more mature. It should have been the other way around.

How and when was he born/conceived? Was that really in a hospital?

Yes, it was in a hospital. But not the maternity ward.

It was very boring there and I had to stay in bed for a whole week, so I made up this character. But it wasn’t until later that I used him as a comic character.

How many comics is he appearing in?

I haven’t counted. Not that many. But he appeared in my first book from 1990. And then regularly in a Swedish weekly for some time. 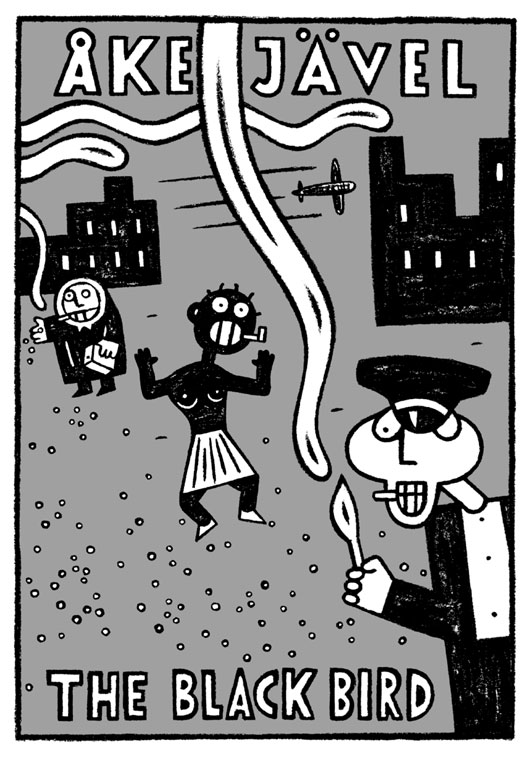 How has his nature/character changed or developed in these 30 years?

I think he has become more like me. More cynical and more skeptical about things in general. Physically he’s a bit more compact now and less perfect in the lines. But that’s what happens when you get older.

How can you even cope with him after all this time?

Well, it’s not easy. But I stopped drawing him. Or at least I tried to. Anyway, he’s not important for the stories, really. He’s mainly an excuse for telling something else.

Some characters happen to reappear in different stories, thus constructing a peculiar world of Lars Sjunnesson that is completely crazy, but at the same time rather plausible thanks to the longevity of those characters. The reader is happy to meet again the old familiar ones. Is this cosmogony your intent at all?

No, it wasn’t intended that way. It just happened. But now I like it. I’ll try to connect more of the characters in the future. But it won’t be easy. A one-dimensional character like Åke Jävel will be difficult to integrate with characters that are almost two-dimensional. With Štefan Skledar it was easier, he found his place within the Bosnian Flat Dog project with ease.

For the Latvian KUŠ! you wrote that you’re not quite sure if you can trust Nature. Is this due to awe in front of her unmanageability? Or is this perhaps a sarcastic criticism of society which, although being a part of her, behaves as if it were detached?

The latter. Society not only behaves as if it was completely detached from Nature, it also seem to believe that humanity has nothing to do with Nature at all. That humanity is nothing but a Social Construction that can be corrected or reformed in whatever way you like. It’s a bit disrespectful. No one would treat a parakeet like that. To me, Nature is pure innocence. Civilization, on the other hand, is something to be skeptical about. So I feel that I have to defend Nature, somehow. Even if it can’t be trusted. 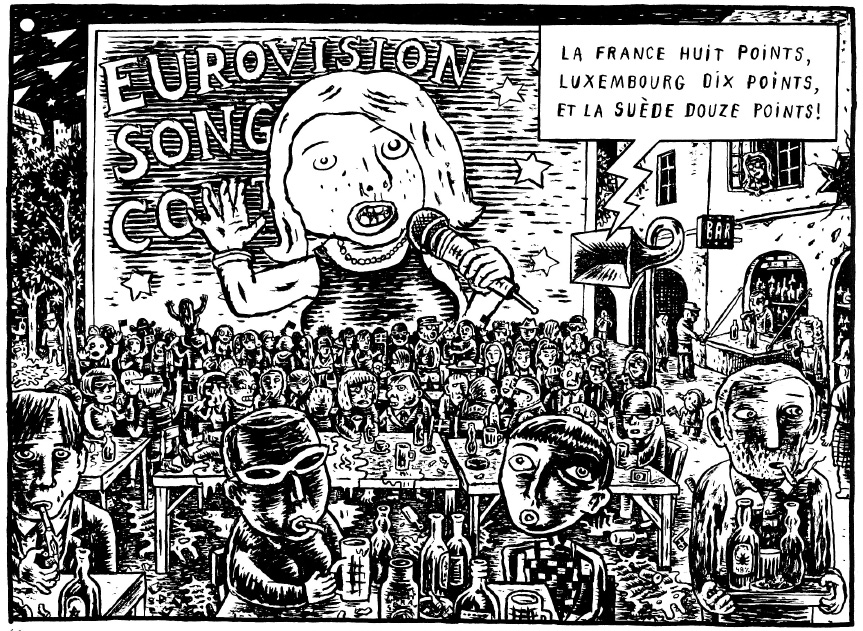 Have you ever considered making a comic for young readers? Have you perhaps made one already?

I’ve tried to do illustrations for children’s magazines. Last time they complained about the look of my characters, and said that they were too “corny”. They wanted me to make them look more “normal”. I couldn’t do that. It was a rather disappointing experience, actually. So maybe it’s better if I try to do a book for really old people instead.

Despite the volume of your work there is very little information on you on the internet. Can you tell us in short more about your work and your life that is not comics related? What do you do for a living? How come you haven’t succumbed yet to the popular demand that each artist needs to have a decent webpage?

Yes, I know, there’s almost no information at all. And most of it is wrong. It’s great.

It’s not that I have a lot of secrets but I think openness is somehow overvalued. I don’t really understand the concept of it. But I will reconsider that statement very soon and start a blog of my own. I will put a lot of private information up on that blog. Boring facts of every kind.

Can you, finally, foretell us the near future of Lars Sjunnesson’s comics universe?

Yes. A few new characters will be entering the scene. All of them female, and nearly all of them very violent. They’re also somehow connected to the story, already published in Stripburger, called Big Fat Bo’s allergic parakeet.

What happened to the famous mannequin of Tito in the end? Where is its resting place now?

He lives by me. I had him sitting in my living room for quite a long time, but he got dusty, and I’m a bit allergic, so he had to go back to his travel case again. A big metal trunk box.

Born in 1962 in Limhamen near Malmö (Sweden) in a big house with lots of relatives. As a child he was interested in birds, insects, cars and drawing. He didn’t go to any art schools, but studied history at the university of Lund. Except for comics he also draws illustrations and writes shorter text pieces. He moved to Berlin in 2001.