His heart is 100 % in comics – M.S Bastian – comic artist, painter and poet
Comic fans are probably well familiar with M.S. Bastian. His comic experimentations and explorations have been published around the world. He has exhibited from New York to Paris. His installations and graphic acrobatics transcend the boundaries of classic comic narration and set new milestones in the Ninth art. We caught up with him at the Berliner Comicfestival, where he was exhibiting together with some other Swiss artists. He presented his installation “Bastian bar”, a tavern of horror and absurdity. Here is what he had to say about comics, art, life and death…
COMICOGRAPHY: Crunch (Berlin, 1993), Schokoriegel (Berlin, 1994), Baluba (Paris, 1995), Päng (Zürich, 1995), Krampitz Rattenherz (Berlin, 1995), Comix Art Monographie – M.S. Bastian (Bern, 1996), Squid (Marseille, 1997), Squeeze (Zürich, 1997), Peep Trash Bubbles (Marseille, 2000), It’s a wonderful world (Bern, 2001)

Bastian, we could hardly say your work is typical comic art. Your work is somewhere between painting and…images placed one next to another, without any linear stories. How do you feel you fit into the comic universe?
I started creating art 20 years ago. At first I was really interested in painting. I went to art school, making paintings, sculptures, stuff like that. I was also interested in drawing and once a teacher asked me, why I don’t try to draw something like a comic, make an illustration with ten or fifteen pictures. So I made a double-paged comic. Then another friend told me that he knew some people in Zurich who are making a magazine called Strapazin and that I should try to send them something and they might like it. At that time I didn’t know anything about the comic scene. But I sent the comic to Strapazin and for the first time published a double-paged comic story. At that time I was more into classic comics. After that I published everywhere, in fanzines and magazines in France and in Germany. What I am doing now is trying to reach the limits of comics. The borderline could perhaps be like the comic bar I made here. Three-dimensional comics and an abstract story resembling a cut-out system. Taking things from all over, words, logos, poetry or pictures. And when I mix it all, that’s my comic story. That’s what I’m searching for.

Today we’re constantly being bombarded with meanings and symbols and images. Is your work a reaction to the times we are living in or is it a step back, expressing yourself with these same images?
Is there’s a higher meaning behind your drawings or are they just a way of expressing yourself?
In a way I’m confused in this world, like many other people, especially in the comic scene, and I’m just trying to find myself. To make a system around me. It’s like a search, trying to find what’s important for me. That’s why I have this collection of all these different stuff around me. I make sketchbooks, and I search for what’s important for me. At any moment you can spot something or read something that is important. Especially me, since I travel a lot. So I try to make a system in order to find myself. In a way it’s a romantic attempt to find my world. It’s an endeavour that never really works. Especially the bar here inside…

Is it more of a therapeutically system for you ?
I would not say therapy. Therapy would be more esoteric in style. For me it’s.. it could be also called a conceptional system.

Your stories. Would you say they have a beginning and an end or are it always open?
I started with the Bukowsky stories and I always felt a connection with the writer. The author is always open, different, and so at that time I made really clear stories. Classical short stories. I started with those. After that I made my own texts. A little bit more abstract. I also took some texts from Jim Morrison. And it became more and more abstract and really more like…I can’t really find a word in English for it.

Do you start working with a definite idea in mind or do you just do whatever comes out of you?
What I try to do…in the art world I exhibit in museums and galleries and in addition to that I’m also active in the comic scene. I see no difference between those two scenes. But the reality is that they are two totally different scenes. Artists are all about the money and gallery business, status and when you are an artist you are always thinking in the back of your mind: will this bring me money? The comic scene is completely different. It’s a subculture and it’s often oppositional…art is not always oppositional.

You think you are successful in that art world as well?
I’m completely confused about it. Right now I’m at a comic festival. Next week I’ll be in a museum in Germany. It’s a complicated question. But I should say that my heart is 100% in comics. But I couldn’t make just comics. Like I told you, it’s a search for the borderline. I also made a phantom train installation. A huge one, you could go inside. It was like a comic. You walked through and in a way you walked through like you walk through a book by reading. In the last exhibition I made a huge wall higher than 25 meters with 400 paintings. It was an art exhibition. Everybody had his or her art; I had a comic.

Do they know about your work as a comic artist in the art world?
They know, but they know, because they see it in my work, not because they read comics or buy Stripburger. Some of my artist friends were here today at the Bastian bar. But it’s different. For example, you could never drink beer at a museum. I’m really the only artist in the art world that has beer on his openings.

You travel a lot. Around the whole world almost. You brought a lot of sketchbooks from your travels. What’s the purpose of an artist making a sketchbook?
I cannot say what it means in general, only for my self. There are two worlds. One is the world of isolation at home in my workspace, where I work with my music and try not to be influenced by the outside world. And I just work like crazy. And the other world is when I go out and meet people or travel. That’s when I take ideas into my head. The sketchbook is like a catalyst. I take things in and the output is at home. The sketches are always the best work. The Peeptrash bubbles album you reviewed in Stripburger (# 34) is also from a sketchbook. I like to work with the sketchbook, but I don’t know what will come out. The wall with 400 painting I told you about. It used only reproductions from a sketchbook. Only black and white reproductions. 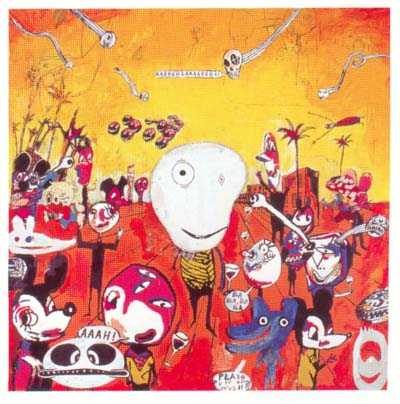