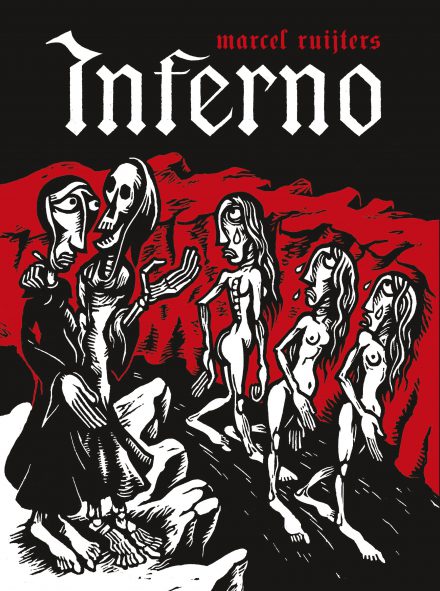 The comics paraphrase of the Dante Alighieri’s classic, enriched with a pinch of irony!

The graphic novel Inferno was inspired by the Divine Comedy by Dante Alighieri, an evergreen work of European literature. The comics paraphrase of this classic in Ruijter’s interpretation assumes the form of a grotesque and meaningful pasticcio that provides the reader with a clever fabula and a completely unexpected end-twist. This modern version of travel through nine circles of Hell is drawn in the Ruijters’ recognizable neogothic manner. The work as a whole is characterized by rich metaphorics, easily applied to the contemporary times. This free adaptation of the classic work by Dante Alighieri came to being as a satire of capitalism and was originally published in Dutch mere months before the stock market crash in 2008.

Inferno, originally published in 2008 in Amsterdam (by Oog & Blik), won Marcel Ruijters the renowned Dutch VPRO award, in the category of graphic novels. It was translated into Slovenian by Mateja Seliškar Kenda.

Marcel Ruijters (1966) is the creator of more than 30 comics books, translated into numerous languages. His distinct style is distinguished by flirting with the medieval visual tradition. He works also as an illustrator, translator, writer and editor at the Dutch magazine Zone 5300. His comics were exhibited in many exhibitions and festivals around the world, winning him numerous prizes and awards, among others the respectable ‘Best young artist’ award in Haarlems Stripdagen in 1992 and the Stripschapprijs in 2014.

The publication of the graphic novel Inferno was made possible thanks to the Royal Embassy of Netherlands in Slovenia, Nederlands letterenfonds and Slovenian Book Agency (JAK).