THESE RELEASES ARE IN SLOVENE LANGUAGE!

This collection of mini-books, dedicated mainly to children, presents three stories from the treasury of Slovenian folk tales and gives them new life by repacking and refreshing them. The main characters of these traditional folk tales are forest animals with human-like qualities who serve as metaphors for human interaction. These stories have been recontextualized and revamped to fit the modern times and are thus appropriate for all ages and in all ages.

Three visual artists who work with different media tackled this demanding task and all three performed excellently. KAJA AVBERŠEK and DAVID KRANČAN are comics artists, illustrators, designers and members of the Stripburger’s editorial board, while ANDREJ ŠTULAR is a constant satellite to the magazine and heavy-contributing artist who also creates art installations, puppet theatre plays and so on.

The collection was awarded the Golden Pear award, a »mark of quality« granted only to high-quality original books for children and youth in Slovenia. It was also used to create a multimedia storytelling performance for children with VJ-ing and live actors. 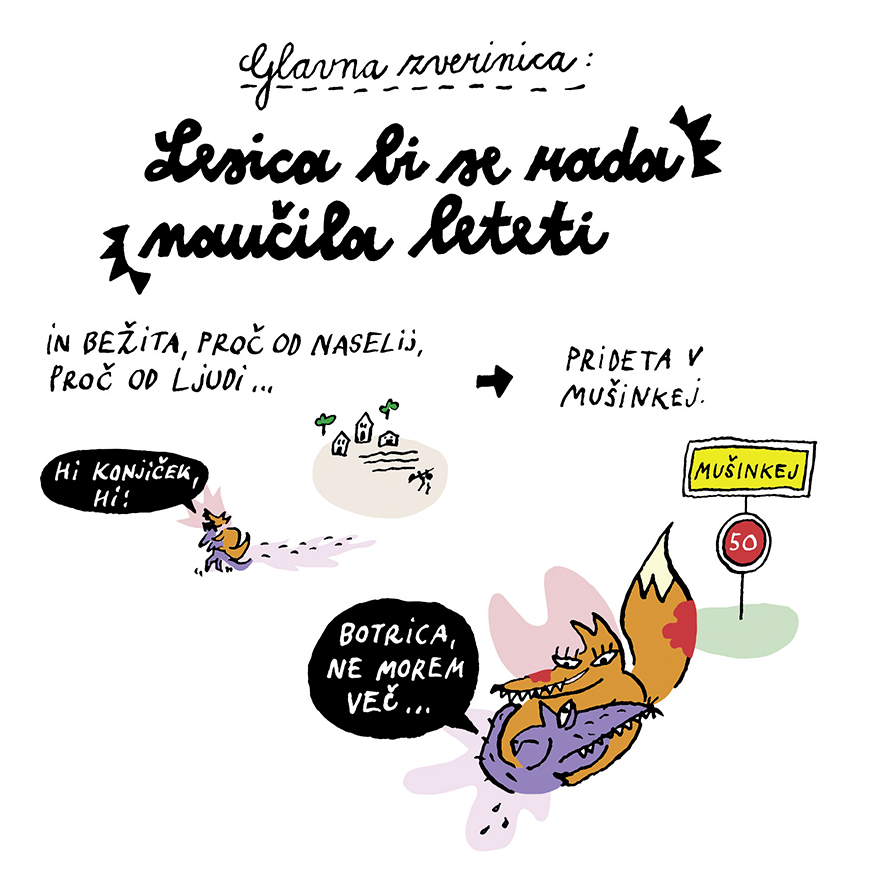 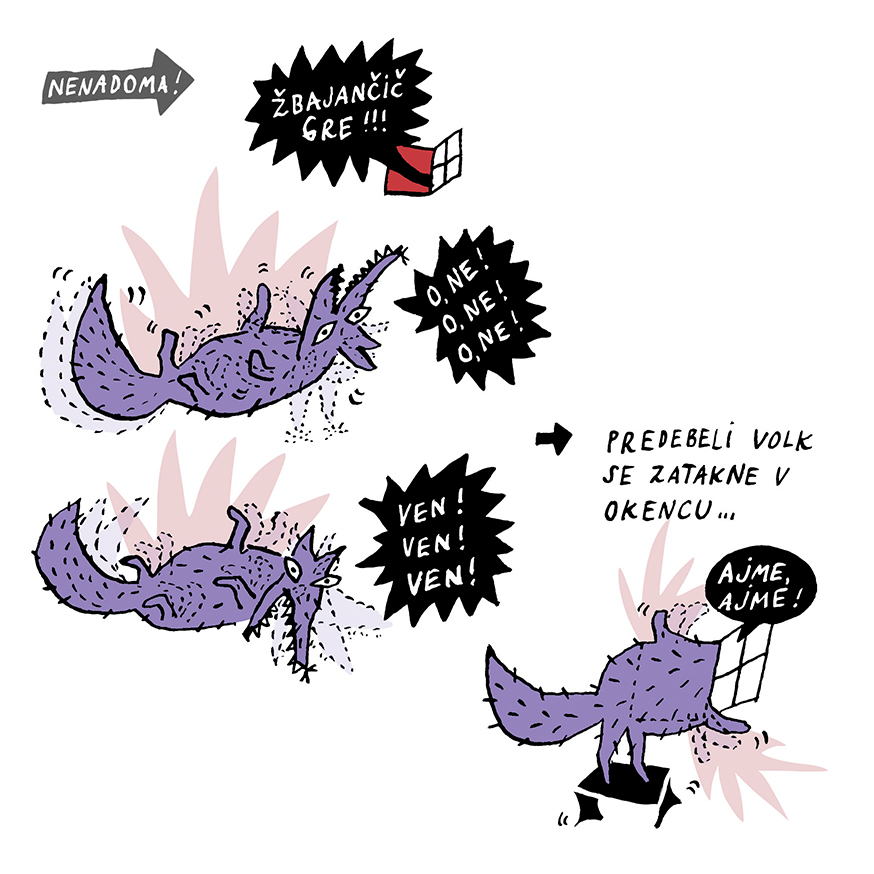 Foxes are cunning animals, but surprisingly not the most cunning ones though. In this story it is the fox who was thoroughly outwitted. How could that happen? Well, suffice to say that pride, bane of all those who are successful, comes before the fall, and the flying fox does fall deep and hard. This folk tale tries to appeal to our moral sense of justice: a thieving, cheating and backstabbing fox finally meets its cruel demise. The reader is reassured: what goes around comes around and karma is inescapable.

This book presents another strong moral lesson and features an intriguing and dynamic plot presented in a very specific and unique visual style. Kaja Avberšek is unladen in her liberal use of the comics page, free from the constraints of frames and of other comics conventions. Her simple and accessible style stimulates children to emulate her drawings and inspires them to make their own comics. 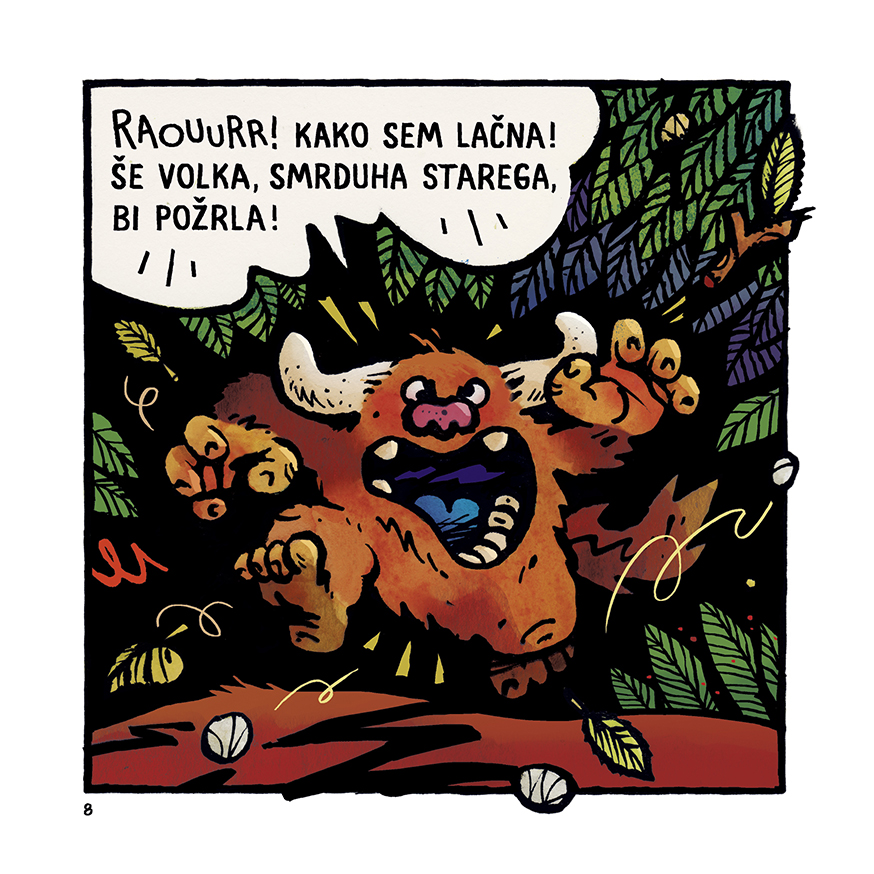 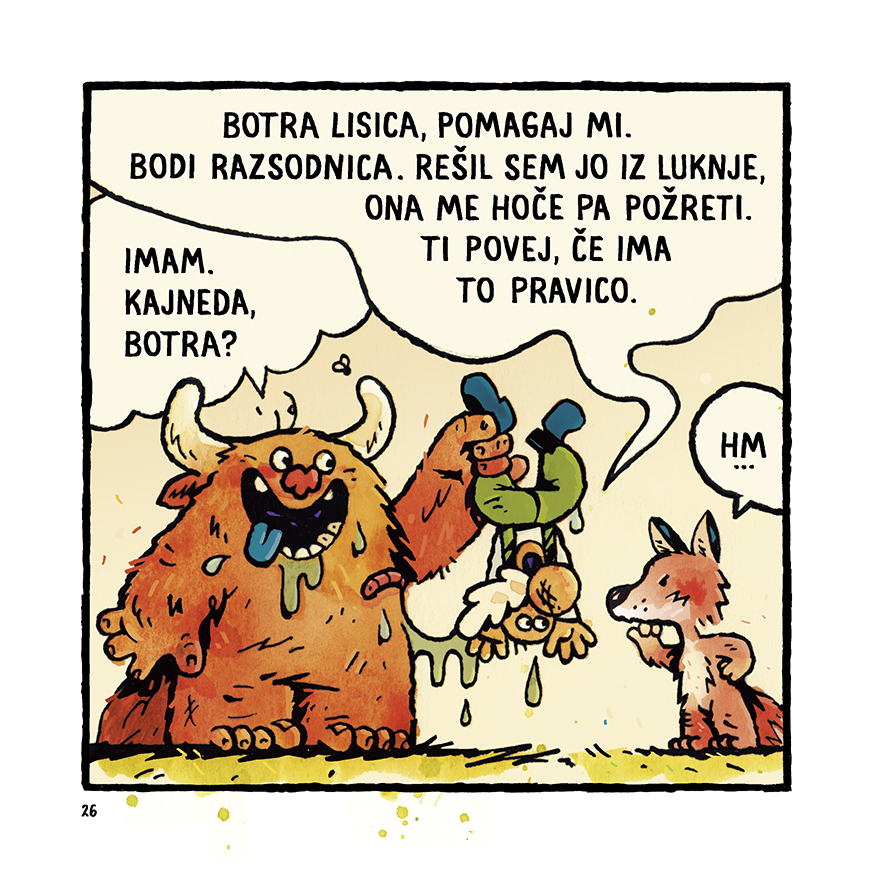 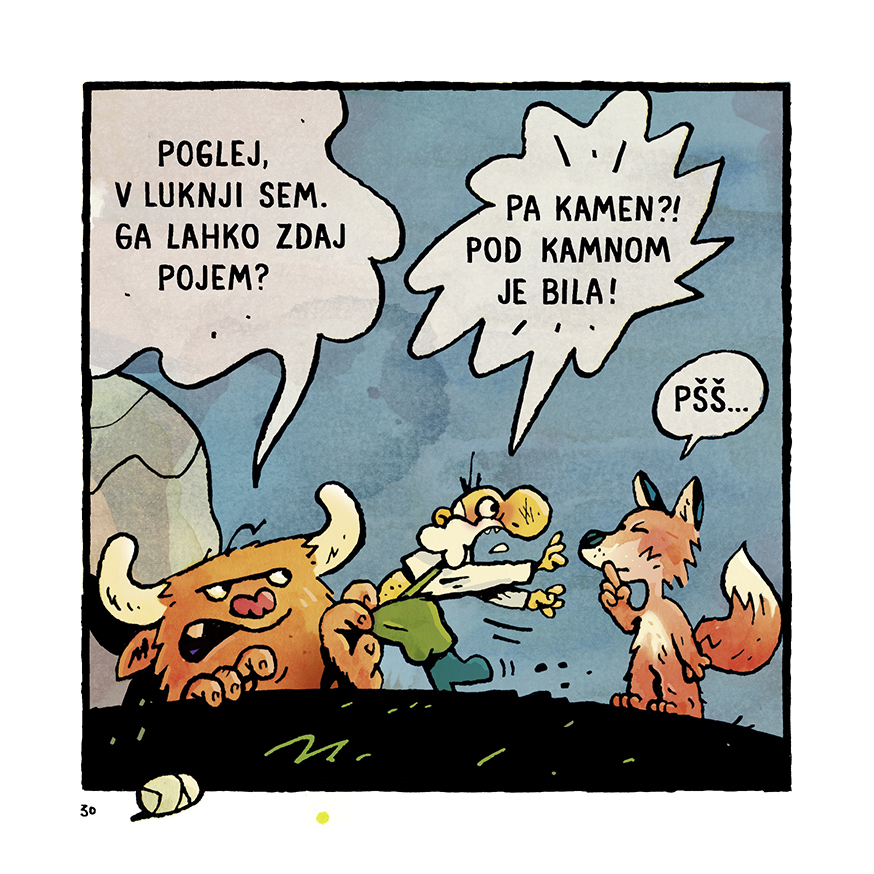 Yet another proof of how brains beat brawn every time.

Beastie the monster is a voracious but less than brilliant being that one day goes hunting rabbits and coincidentally gets caught in a trap. Luckily the beast is able to escape thanks to the help of a »good Samaritan«, a passerby peasant, who almost get eaten by the hungry beast. But then a smart & cunning fox enters the stage and brings an amusing plot twist. Playing the role of a lawyer in a courtroom, the fox tricks Beastie into climbing back into the trap and thus saving the nearly-eaten peasant.
Krančan employs his thought-out and lively artistic imagination to design meaningful and multi-layered stories. The cartoony look of the characters quickly seduces the young reader’s eye and heavily contributes to the instant likeability of the book but never appears conventional or shallow.

Andrej Štular: Run, the World Is Coming Down! 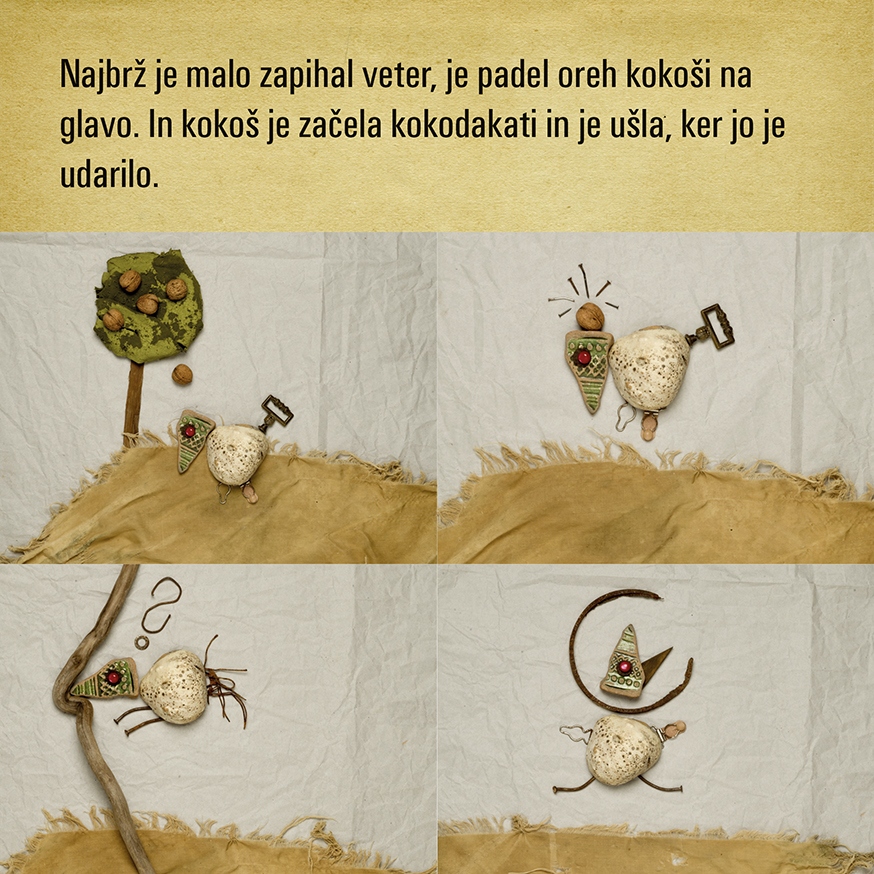 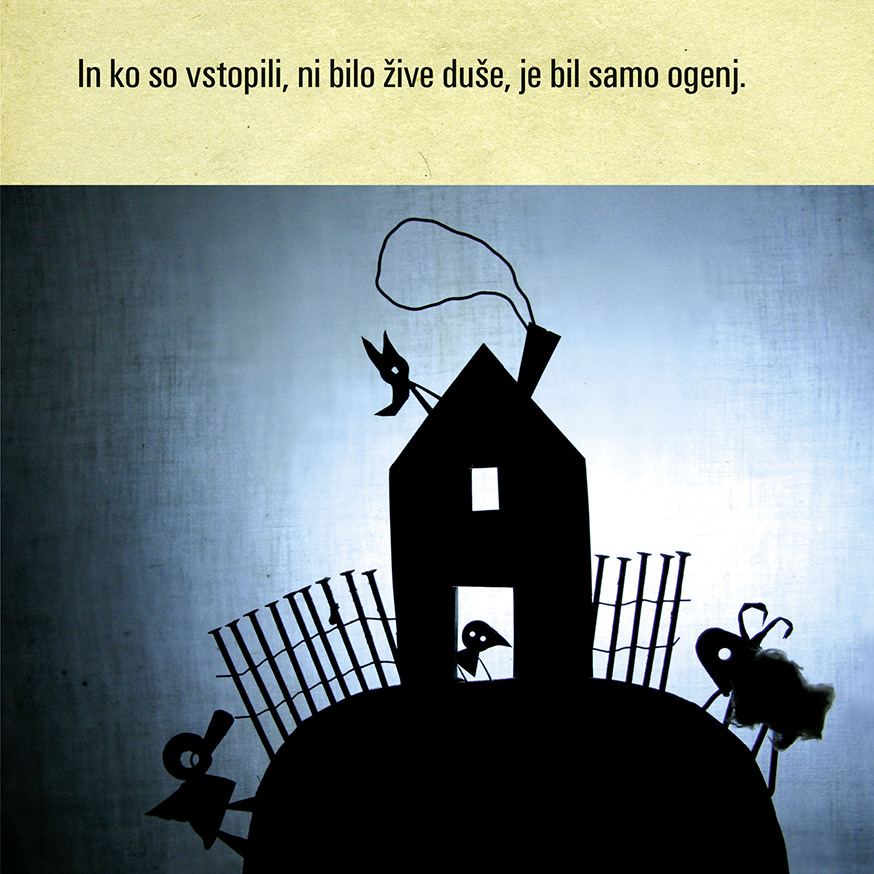 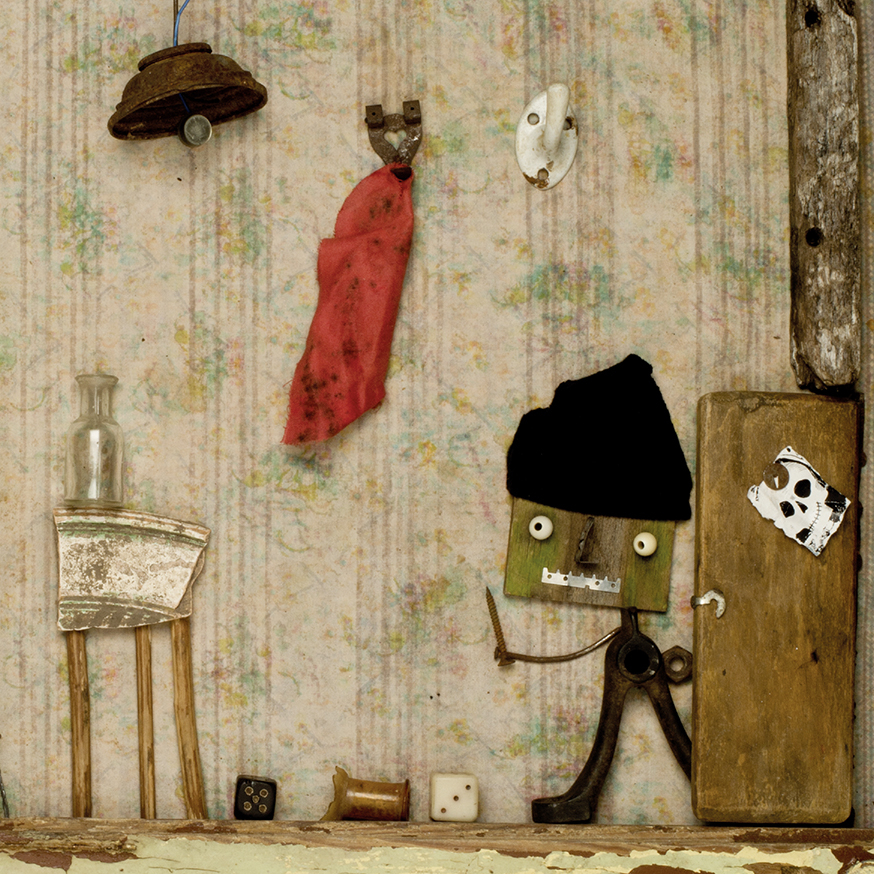 Gravity is inescapable, as a chicken learns when a nut falls on its head. Thinking the world is ending, the chicken panics and runs for its life while a cock, a goose and a ram follow it on a very special adventure. The story escalates when this group of animal friends beats and scares away a group of evil thieves.
The book is innovative in its use of ready-made, thrown away and then re-used objects that are combined, arranged and shaped as characters of the story – an approach that won the book the award for the best visual design at the Biennial of Puppetry Artists of Slovenia. Štular’s work is often characterized by his unconventional approach and his rebellious tendency of »sticking it to the man«.