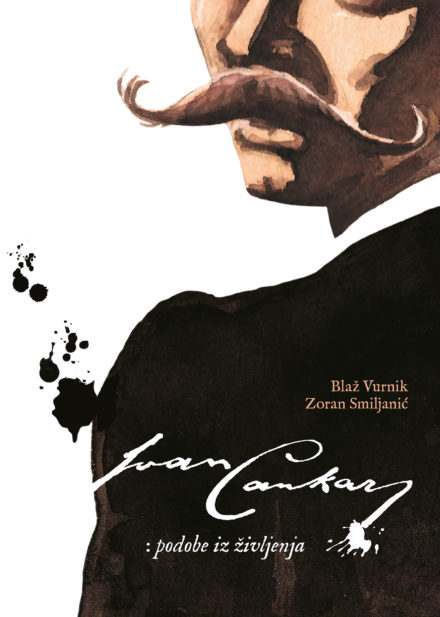 Ivan Cankar: Images of Life – a biographical graphic novel on the life of Ivan Cankar, a Slovenian literary master and bigger-than-life personality from the early 20th century.

Ivan Cankar (1876–1918), a playwright, a poet, a critic, an essayist and a political activist is considered to be the greatest Slovenian writer of all times and was the first Slovenian professional writer. Cankar, a writer of great versatility who was acquainted firsthand with poverty and deep existential struggle, could write with profound sympathy and insight about the human condition in the bourgeois Austro-Hungarian empire at the turn of the 20th century. This outspoken political and social commentator is the most translated Slovenian author abroad as his works often touch on still topical issues nowadays: alienation, economic justice, unrequited love, war and peace.

This biographical graphic novel shows the life of Ivan Cankar with historical accuracy and documentary value and is further enriched by a selection of some strongest quotes from his works. A vibrant comics narrative faithfully depicts the Cankar’s complex, passionate and creative personality as well as many of his contemporaries, friends and even romantic partners. Writer’s life, character and work all come to life intertwined in an inseparable whole which even Cankar himself would probably find an interesting reading.

The graphic novel was awarded the main Book of the year award at the 34th Slovenian Book Fair last year.

Zoran Smiljanić (1961) is a veteran comics artist, illustrator, cinephile and writer. He started publishing his comics in the Slovenian and Yugoslavian press in the 80’s. Later he created several graphic novels and comic books, often on the topics of history and war. With Marjan Pušavec as the scriptwriter he is also the co-creator of the first Slovenian comics saga in 5 books titled Meksikajnarji about a group of Slovenian volunteers who traveled across the Atlantic to fight for the Habsburg Archduke Maximilian in Mexico.

Dr. Blaž Vurnik is a historian and recent history curator at the City Museum of Ljubljana. He’s already collaborated as the script-writer with Zoran Smiljanić earlier with the graphic novel Spomini in sanje Kristine B.: Ljubljana 1941–1945, presenting the history of the occupied Ljubljana through the eyes of a child.