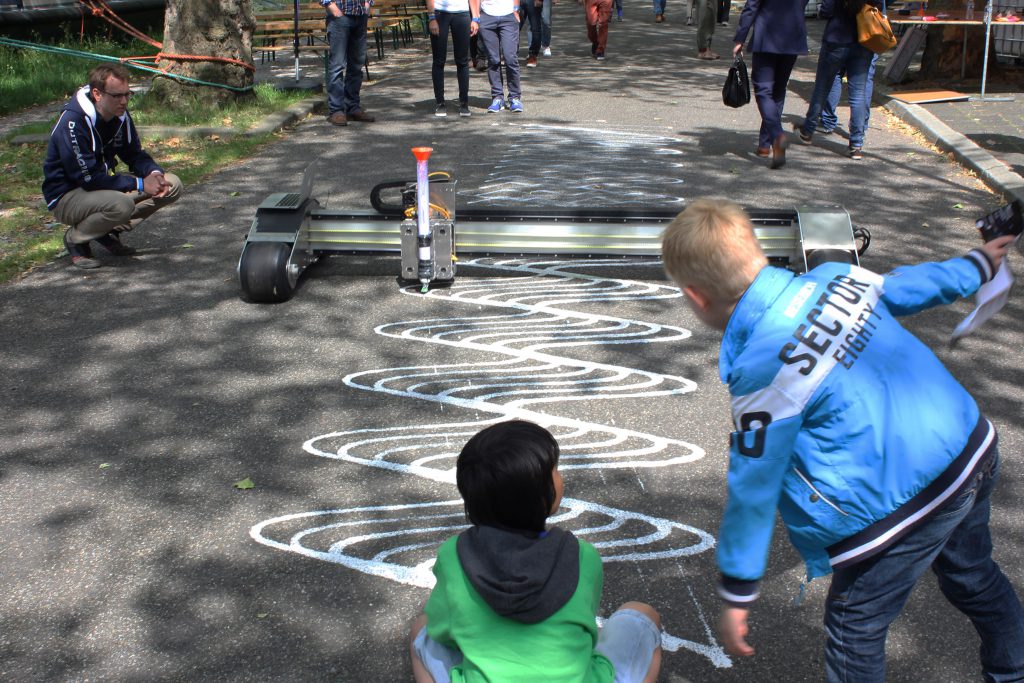 Chalky is a project designed by the Dutch artist Daan Brinkman, working together with his collaborators René Bakker and Daniel Berio. It employs a mechanical / robotic »printer« of great dimensions which is able to create floor drawings using previously created and digitalized templates. »Chalky« thus merges both digital (input) and analog (output) techniques and uses pavements, sidewalks and streets as an infinite canvas.

The project, an intersection between classic visual and street art, was designed with collaboration with other artists in mind, enabling them to use the tool for floor drawings in a public space. For Chalky, as a guest of the Tinta comics festival, this will thus be the first ever attempt to create floor comics. Comics artists will create their own works in a comics jam session, then print them using Chalky in several locations throughout the city. Comics jam session is for experienced comics artists.

Authors:
DAAN BRINKMANN (1983) explores interactive relations with the spectator in his works, where the audiovisual elements are used in a way that emphasizes other social experiences. His works have been presented both in established artistic institutions and in public urban spaces all over Europe and South America. RENÉ BAKKER (1979) is an independent designer, constructor and creative engineer who explores the intersection between technology and art with his collaborations and coauthorships in several projects. DANIEL BERIO (1978) is a programmer and artist. First he began as a graffiti artist and later dedicated himself to graphic design, multimedia content, computer games and different audio-visual project programming tools.