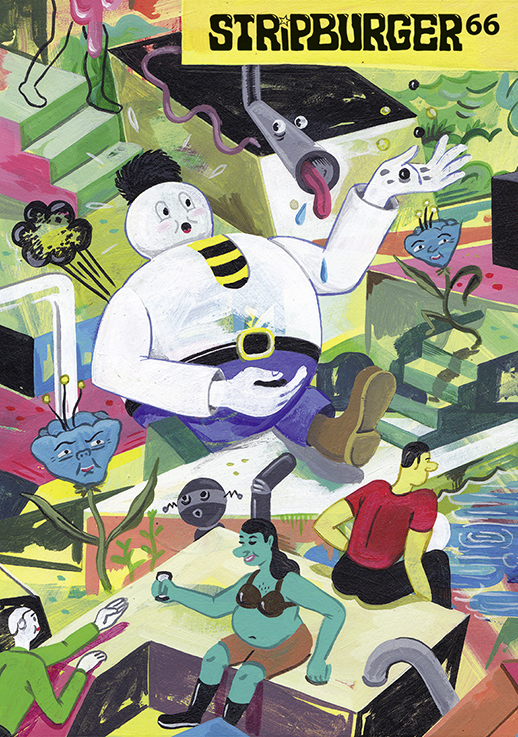 December is running out of days, but before it ends, let us present you with a fresh batch of comics material to help you through the coming festivities, to help you pass your hangover or to help you gift your significant others.

The latest 66th issue of Stripburger features quite a few members of the younger generation of comics artists whose work bears witness to the comics being an extremely vital form with a plethora of expressive possibilities and creative freedoms.

From Belgium, the Mecca of European comics, comes a vibrant and experimentally inclined 6-member collective Tieten met haar, whose name should draw at least a tiny smile on your face. They’re joined by Jelle Kindt and Brecht Vandenbroucke, yet another representative of the Belgian “new wave” of author’s comics, who contributed the color pages and the cover.

Olaf Ladousse, the Madrid-based comics linocutter and QueSuerte-maker who performed and exhibited his works in Ljubljana this autumn, was thoroughly interrogated in the first interview, while the second one features Nicolas Presl, here yet unknown French master of silent comics.

Curious cats will rejoice over the second part of Max Baitinger‘s comic, where the physicist and Nobel prize winner Richard Feynman reveals how magnets work. Martin Kellerman again contributed two rather verbose one-page comics with an anthropomorphic and outspoken character named Rocky who tells it like he sees it.

Arkadi, an old friend of our magazine, contributed a grim image of Mother Europe, surrounded by the shadows of colonialism and slavery, in his long and very up-to-date comic, while Andrej Štular finishes off with a telling “Hellcome!”

Enough talk, let the comics do the speaking! And happy holidays!

RELEASED: December 2015, format A4-, 96 pages (12 full colour pages), offset printed locally in Slovenia.
GET IT: 3 € + around 5 € international shipping.
HOW TO BUY: order it from our webshop or write to burger@mail.ljudmila.org.
WE SHIP WORLDWIDE! Preferred payment: PayPal.
SUPPORT: The Slovenian Book Agency (JAK).