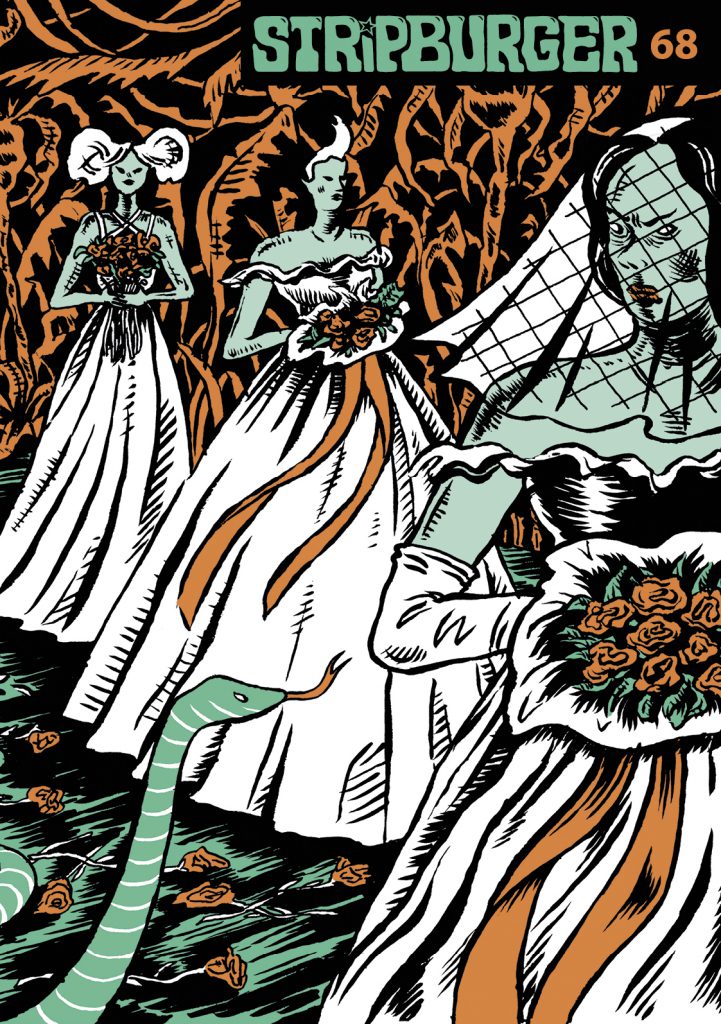 Right before the end of the year, a new selection of comics from here and there sees the light of day in a country surrounded by razor wire. This 68th issue of Stripburger again brings forth a various and diverse selection of independent comics from all over the world. 96 pages of the magazine carry a good dozen (and more) of domestic and foreign artists, including both familiar names and new pleasant discoveries.

Till Lukat, a young wandering comics artist deliberates on the occasional usefulness of thinking inside the box for comics creators in his editorial. A frame or a skeleton of comics narratives can also be made of different events, characters, fragments of everyday lives, motives and quotes from art history, literature, pop culture … surely this year’s last issue of Stripburger will convince you of this! As the Swedish comics artist Anna Ehrlemark says in her interview: “You can tap into reality and fish things out of there.” What follows is a sharpening of view until a detail stands out from the rest, stands on its feet and begins a new life in its new shape. On the other hand, Peter Kuper, a seasoned veteran of American comics, shows us in his latest comics story aptly titled Trumped that reality can sometimes surpass even the craziest work of fiction.

The second interview is dedicated to a domestic comics heavyweight champion and a long distance runner Zoran Smiljanić who confesses that Slovenia is the land of “artist’s comics”, inspite of “the domestic comics see the light of day as a result of enthusiasm, stubbornness, madness, obsession and a hefty dose of stupidity, both from artists and publishers.”

Of course, dear reader, there is no need to convince YOU to support such stupidity, or, shall we say, independent comics production that stands out of the box, right? Right!

May tomorrow’s comics be even better!

RELEASED: December 2016, format A4-, 96 pages (12 full colour pages), offset printed locally in Slovenia.
GET IT: 3 € + around 5 € international shipping.
HOW TO BUY: order it from our webshop or write to burger@mail.ljudmila.org.
WE SHIP WORLDWIDE! Preferred payment: PayPal.
SUPPORT: The Slovenian Book Agency (JAK).