Peter Kuper in Focus at the Tinta comics festival 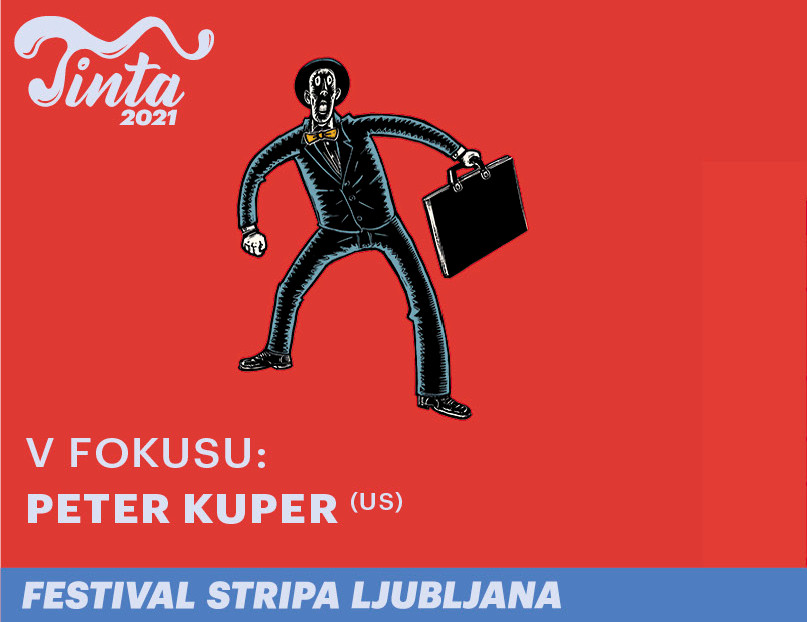 PETER KUPER – ARTIST IN FOCUS AT THE TINTA COMICS FESTIVAL 2021

Between 6 and 10 October, Ljubljana will host the TINTA International Comics Festival, which once again brings a diverse selection of top exhibitions and events in the company of high-profile local and foreign guests and invites you to expand your comics horizons.

The focus of this year’s edition is the renowned American comics artist PETER KUPER, an award-winning author, best known for his graphic novel adaptions of classic literature and autobiographical, political, and social observations. His politically charged illustrations and comics have appeared in newspapers and magazines around the world. He has lectured around the world and produced over two dozen comic books. His most recent graphic novels include Kafkaesque, a mesmerizing interpretation of fourteen iconic Franz Kafka short stories and an adaptation of Joseph Conrad’s Heart of Darkness – both have been recently translated to Slovenian. He is also known to the Slovenian readers as a regular contributor to the Stripburger magazine for nearly 20 years.

Unfortunately due to the chaos of COVID-19 Peter Kuper will not be able to attend the festival. Still, the events at the festival will provide an in-depth insight into his work.

His artwork will be showcased in a Metamorphoses group exhibition at the Vodnik’s Homestead Gallery, dedicated to comics adaptations of famous literary works. Alongside Kuper’s artwork, the exhibition will feature two eminent Slovenian comics artists as well, Andrej Štular and Marko Kociper, with their recent work inspired by literary texts.

Kuper’s work will also be part of the special showcase of TINTA 2021 festival at the Kresija Gallery, that will offer an overview of this year’s program and special guests.

Additionally, Kuper will hold an online masterclass on the challenges of adaptations of classic literary texts into the comics format and exploration of inspiring connections between the two media and talk about his long-years career and socially conscious work in comics and periodical press in the USA in Kino Šiška.

The special pre-event at the Slovenian Cinematheque will focus on the Kuper’s adaptation of Joseph Conrad’s 1899 novel Heart of Darkness.

The special event at the Slovenian Cinematheque will focus on the Kuper’s adaptation of Joseph Conrad‘s 1899 novel Heart of Darkness. This controversial portrait of colonialism in Africa was also the inspiration for another American masterpiece, namely Francis Ford Coppola’s Vietnam-set movie, Apocalypse Now. A screening of the movie will be accompanied by a panel discussion on the power of adaptations & reinterpretations of history through arts (literature, comics, film).

The display in Kresija Gallery showcases a couple of artworks by each of the main guests of the festival: the renowned, award-winning masters of comic expression, Frenchman Emmanuel Guibert and American Peter Kuper, the Berlin-based Riso publishing house Colorama, while Zlati Osli (Golden Donkeys), a colourful group of Slovenian comics artists, will fly the hometown flag.
The exhibition will be on display until 24th October.

The group exhibition Metamorphoses at the Vodnik’s Homestead Gallery is dedicated to comics adaptations of famous literary works. Alongside Kuper’s artwork, the exhibition will feature two eminent Slovenian comics artists as well, Andrej Štular and Marko Kociper, with their recent work inspired by literary texts.
The exhibition will be on display until 14th November.

More about the exhibition >>

Saturday, 9 October 2021, at 4 PM / Kino Šiška, Ljubljana
PETER KUPER – MASTERCLASS
Renowned American comic book artist and illustrator Peter Kuper is, apart from his rich and varied comics opus, known also for his sharp political and social observations. His presentation will be both a career retrospective, including some of his influences, and a breakdown on how he has created graphic novel adaptations of classic literature by authors such as Franz Kafka, Joseph Conrad and Upton Sinclair. He will also talk about his work for The New Yorker, MAD Magazine, World War 3 Illustrated and much more. The masterclass will be held online.