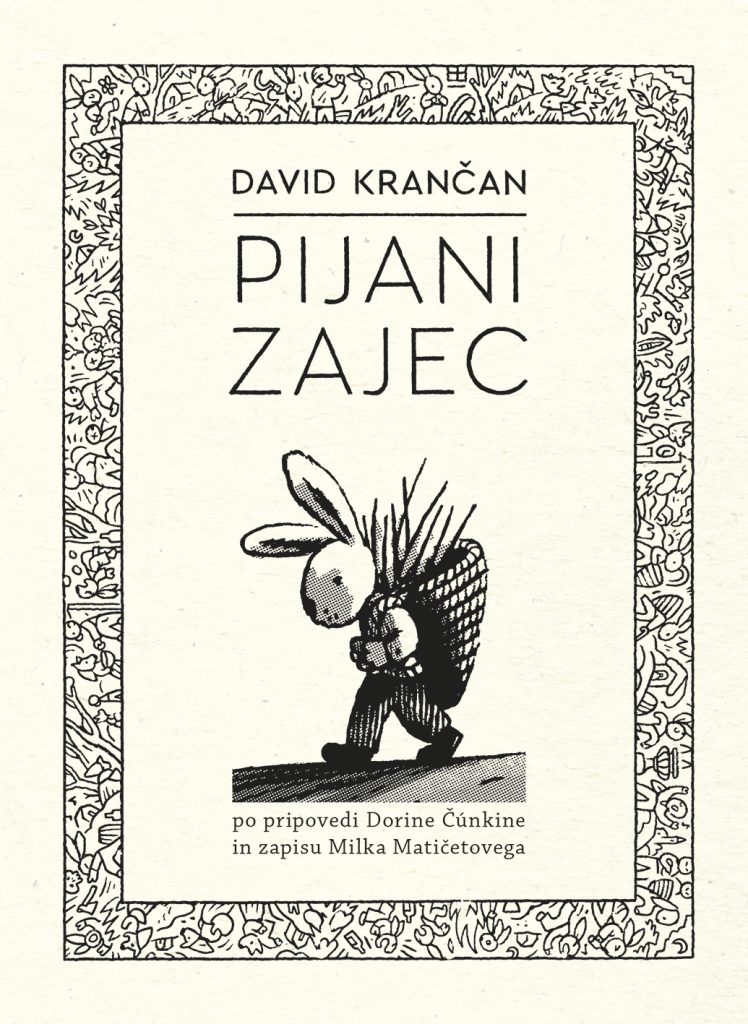 This year’s new comics album by David Krančan is accompanied by his independent exhibition with the same title. The artist is exhibiting original pages from his newest comic and creating a series of mural drawings that round out and complement the visual narrative about yet another member of the animal world. The spotlight of the exhibition is namely on the drunken rabbit, an unusual character in a folk tale from the famous Zverinice iz Rezije collection (tale narrated by Dorina Čúnkina, written down by Milko Matičetov).

After the comics story Grdina (Stripburger/Forum Ljubljana, 2014), Drunken Rabbit is Krančan’s second excursion into the field of folk literature from Resia Valley. Again, the artist has reached into the content and adapted this product of folk imagination according to the spirit of the current times: from the pattern of a classic tale to an adventurous parable on the human nature. Krančan employs his thought-out and lively artistic imagination to create meaningful stories that question the world we’re living in. The exhibition is characterized by a visual and substantive dialog between the completed comics story and portrayals of the main character, created especially for this occasion and embedded in a simple and comprehensible narrative. The narrative is created in a distinct visual style characterized by meaningful details and skilful framing, but above all by a special feel for a communicative and dramaturgically solid storytelling.

The drunken rabbit was re-created in 3D for this exhibition by Marko A. Kovačič and Rok Mohar.

DAVID KRANČAN has been a member of the editorial team at Stripburger for more than a decade. He co-created (with Andraž Polič) a book of comics haikus titled Na prvem tiru (2008). His illustrations are regularly published by newspapers and magazines in Slovenija (for example on the cover of Dnevnik’s Objektiv). His works often focuses on the exploration of the borders of the comics medium. Recently he created a comics book for children titled Grdina (Zverinice iz Rezije v stripu; Stripburger/Forum Ljubljana, 2014). He’s also regularly mentors different comics workshops.