Greetings from Cartoonia – The Essential Guide of the Land of Comics 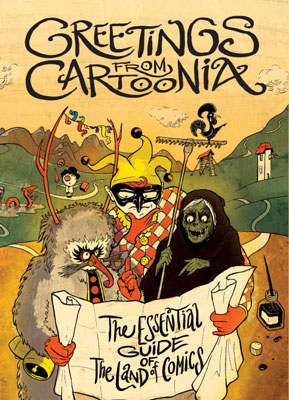 Welcome to Cartoonia land! 12 European comics artists gathered “objects of inspiration” from each others’ homelands, what emerged is a completely new, transnational entity.

The name Cartoonia is derived from the word »cartoon«. As you may know comics have been marginalized in most of the European countries and even forbidden in some of them. Therefore we felt a need to establish a safe, lively country, a fatherland of some sort to all cartoonists/comics artists of the world, as well as comics in general. The well-known citizens from these countries are in this essential guide of the land of comics telling stories about homelands of the other residents of the new Cartoonia land.

Artists from abroad were given the task of creating a portrait of Slovenia, while artists living in Slovenia were asked to make a portrait of the countries their foreign colleagues come from. The stories were inspired by objects and other specialties of the countries: architectural types, folk craft, archeological findings, food, cars, endemic species and cultural differences. The comics present us with an unconventional look at the countries of Europe and their inhabitants, which transcends national stereotypes and cultural differences in its fantastic interpretations and humor. There are 6 Slovene and 6 foreign artists involved in this lively intercultural dialogue.

Andrej Štular made a special map of Cartoonia land.

The project includes a traveling exhibition.