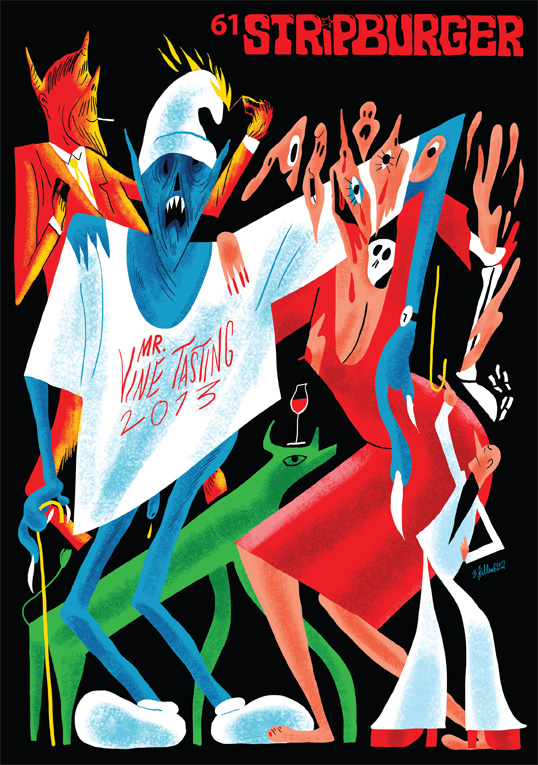 The new issue of Stripburger is a really special issue. Oh, here we go again. Why, you ask? Because Stripburger has never been so colourful before! The printed proof is here. This time, for now only as a pilot edition, the colour section was extended to include more pages. Instead of the standard eight, this time there are a good 33! The reason for this is the Norwegian block, which represents a well-developed and obviously colourful comics focus, in which there is a glut of great comics artists. It is our privilege to welcome some old and new friends into our midst: Jason, Bendik Kaltenborn, Lars Fiske, Kristoffer Kjølberg, Christopher Nielsen, Anna Fiske, Inga H. Sætre, Sindre W. Goksøyr and Martin Ernstsen. In order to leave room for the Nords, we therefore had to sweep up other contributions and keep them for the next issue. The usual block has spread into an entire neighbourhood, which explains the coinciding length of the introductory text on the Norwegian comics scene written by Erle Marie Sørheim.

But do not worry, our city remains, despite it all, multinational. This quarter is represented by  Martin Ramoveš and David Krančan from Slovenia, Alex Potts from UK and Stripburger’s old pal Lars Sjunnesson from Sweden/Germany with already the third part of a mini serial about Åke the bastard. The flood in the city of good comics has also claimed some victims among the texts – these are fewer in this edition. However, you will still find the continuation of the theoretical section Raz, dva, strip! and we also had the ​​honour of interviewing the Norwegian nomadic comics artist Jason.

RELEASED: mAY 2013, format A4-, 96 pages (33 full colour pages), offset printed locally in Slovenia.
GET IT: 2,50 € + around 5 € international shipping.
HOW TO BUY: order it from our webshop or write to burger@mail.ljudmila.org.
WE SHIP WORLDWIDE! Preferred payment: PayPal.
SUPPORT: The Slovenian Book Agency (JAK).